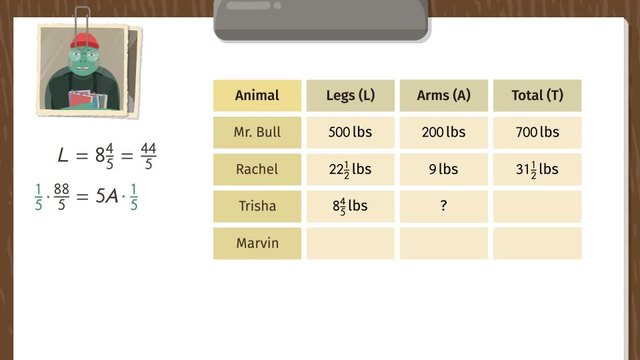 Basics on the topic Equivalent Ratios Given Parts and Wholes

After this lesson, you will be able to identify equivalent ratios and solve for every part of the proportion.

The lesson begins by teaching you to identify the constant of proportionality between parts and the whole ratio. It leads you to learn to use this constant to set-up an equation that will relate all parts. It concludes by solving for any part of a proportion through the use of that equation.

Learn about equivalent ratios by seeing Mr. Bull plan his trainees’ work-out in his gym.

After watching this video, you will be prepared to solve multi-step problems with ratios through percent, such as discounts, commissions, interest, taxes, fees, increases, decreases, and percent of error.

Common Core Standard(s) in focus: 6.RP.A.3.A A video intended for math students in the 6th grade

Here we are at Mr. Bull's Animal Gym, where animals of all shapes and all sizes are trying to get fit. The gym's namesake and head trainer, Mr. Bull, explains a workout plan to Rachel the Rabbit, Trisha the Turtle, and Marvin the Mouse. Mr. Bull knows the importance of having both strong legs and strong arms, so his training plan includes Equivalent Ratios Given Parts and Wholes. Let's take a look at Mr. Bull's personal training plan. For part of his workout, he lifts 500 pounds with his legs. For the other part, he lifts 200 pounds with his arms. Those two parts make up the total, or the whole, of 700 to complete his workout. Mr. Bull's goal is to create workout plans for the three animals that are proportional to his workout plan. To do this, we will use the parts and the whole to calculate the constant of proportionality, represented by 'k'. The constant of proportionality will allow us to write an equation relating the variables. Once we have an equation, we will be able to solve for an unknown value with substitution. From the table, we know that legs equal 500 pounds and arms equal 200 pounds, which simplifies to 5 over 2. We can express this as a proportion, 'L' over 'a' is equal to 5 over 2. Now that we have an equation, we can calculate the proportional workout plans. The first participant is Rachel the Rabbit. She came to work out because she wants to make the Animal Olympics someday Mr. Bull looks at Rachel's arms and thinks she can work out with 9 pounds. If everything is to stay proportional, how heavy should the leg weights be? We can use the equation we just calculated to figure out the unknown part. Plug in 'A' equals 9 into the equation and then use opposite operations to isolate the 'L', multiplying both sides by 9. This gives us our missing part, 45 over 2 or 22 and a half pounds. Let's write this in the table. Now that we have the two parts, we can add those values together to find the whole. To do that you'll want to rewrite the mixed number as an improper fraction and convert the whole number 9 to a fraction with the denominator of 2. Now simplify the improper fraction to find the total, 31 and one-half pounds. Rachel knows just what to do, so Mr. Bull sends her off to get started on her workout. Now it's time for Trisha the Turtle to get her workout plan. She's come to Mr. Bull because she wants to do more than just sit around all day. He can tell from her legs that Trisha should work out with 8 and four-fifths pounds. So how much should she use to strengthen her arms? Before we calculate anything, let's convert the mixed number to an improper fraction. Now we can start calculating, using the same proportion as in our first example. But this time we plug in the value 44 fifths for 'L' and solve for 'A'. To isolate 'A', we can cross-multiply. Then, we have 88 fifths equals 5 'A'.

Using opposite operations, we divide both sides by 5, which is the same as multiplying by its reciprocal, one-fifth. Now we are left with the improper fraction 88 over 25 is equal to 'A', which is 3 and 13 twenty-fifths. Remember to fill in the chart every time you have a new value, including the total of the weights in the last column. To find this missing part, modify the equation to have the same denominator of 25, add, and then simplify to get 12 and 8 twenty-fifths. Mr. Bull sends Trisha on her way, and now it's time for the smallest animal, Marvin the Mouse. Marvin the Mouse only wandered into the gym because he thought he smelled cheese, and he has no idea what Mr. Bull has been going on about. But Mr. Bull is convinced the mouse can lift 2 and a half pounds in total. However, he's not certain about the individual leg and arm amounts. That means we know the total, 'T', but there's no 'T' in the equation we used before. What should we do? Earlier, we looked at the ratio of one part to another part, and it was constant. This time, let's look at the ratio of one part to the whole. Do we have a constant ratio? To figure it out, let's calculate the ratio of arms to total weights and check if the ratios are equivalent. For Mr. Bull's workout, the ratio of the arm weights to the total weight is simplified to 2 to 7. For Rachel the Rabbit, the ratio of the arm weights to the total weight also simplifies to 2 to 7. And for Trisha, it's the same. This confirms that all of our previous calculations are correct, since the ratio is 2 to 7 for all the workouts.

We can then write that A over T equals 2 over 7. To isolate the 'A', we can multiply both sides by 'T' to get 'A' equals 2 over 7 times 'T'. Now, that we have our equation, we can plug in two and a half, or 5 halves, for 'T' and solve to get 'A' equals 5/7. So, we know the amount of arm weights, but how can we figure out the amount of the leg weights? Just subtract the arm weights from the total weight. The mouse should lift leg weights equal to 1 and eleven fourteenths pounds. While Trisha and Rachel are busy lifting weights, let's summarize. When considering proportional relationships with parts and wholes, be aware they can be written in different ways. We can compare the two parts, or we can compare a part to the whole. Also, the numbers can be whole numbers or fractions. But no matter what, the process remains the same. Marvin the Mouse didn't even start his workout, Rachel the Rabbit finished hers a short while ago. and Mr. Bull has closed up shop for the day, but it looks like Trisha the Turtle will be a little while.

More videos for the topic Ratios and Rates Involving Fractions