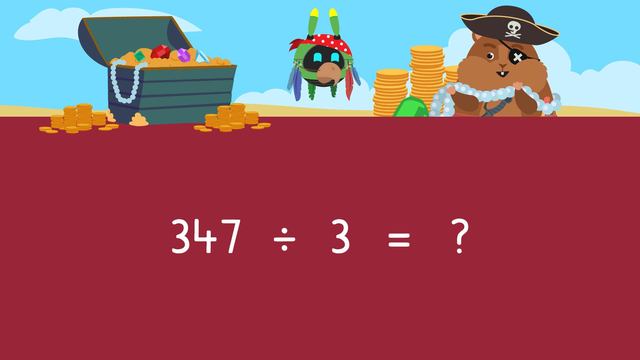 Basics on the topic Division with Remainders (Area Models)

In This Video on Remainders (Area Model)

Mr. Squeaks and Imani want to share some treasure with their crew. To do this, they want to learn how to solve division problems with remainders using the area model, so they can share equally between their crew and keep the remainder for themselves! In this video, you will learn how to use a area model with division and remainders.

You can use an area model for division with remainders by following some steps. Let’s practice with fifty-nine divided by five.

Next, put the divisor, five, on the left side, and write fifty-nine inside the first column.

It is usually easier to multiply by tens first, so write a ten above the first column.

Now multiply ten by the divisor, five, which is fifty. We need to subtract fifty from fifty-nine, which is nine.

Then, bring the nine over to the next column. This time, think how many times does five go into nine. It goes one time, so write one above the column.

Next, multiply five by one, which is five, and subtract this from the nine, which leaves us with four.

Since five cannot go into four, this will be the remainder. We add the ten and one at the top of the columns for the quotient, and add R 4 for the remainder.

To do division with area models:

Below you will find a worksheet on dividing with area models and remainders.