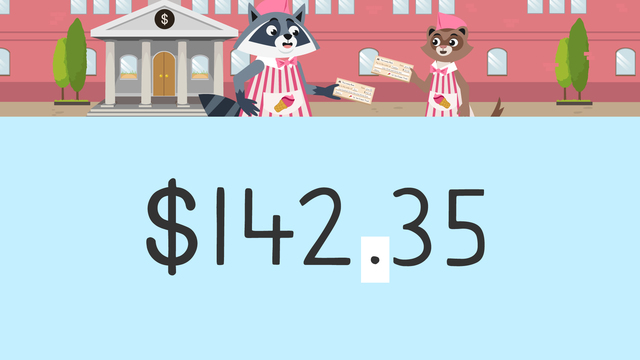 Basics on the topic Decimal and Money

Have you ever looked at a grocery bill? When you look at the monetary amounts, you will often see something like $3.52. This means that the price is between 3 dollars and 4 dollars. With decimal numbers like 3.52 you can indicate amounts between whole numbers. Did you know a decimal number is often represented as money? This is explained in our video lesson about money with decimal points. After the video, you can also find exercises and worksheets about money with decimals for fourth grade.

If you are not quite sure about money and decimals yet, have a look at the place value chart below. It can help you understand money in decimal form.

Decimals and Money – Example and Practice

If you want to practice money with decimal places on your own, check out our decimal and money worksheets.

More videos for the topic Coins

The Dollar (plus Dollar Notation)

Which Coins are Missing?