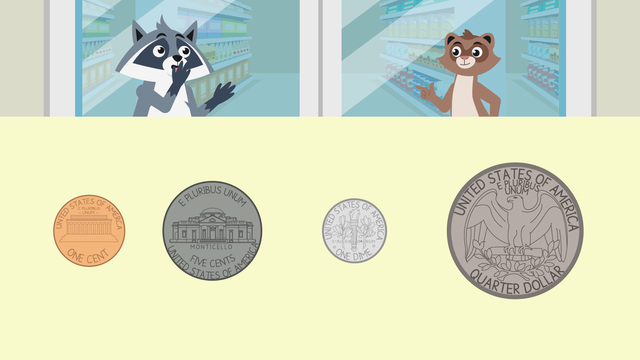 Basics on the topic Coins

In this US Coins Video (first grade)

Freddie and Zuri are walking up to the supermarket when they see four machines by the doors: a gum-ball machine, a sticker machine, a horse ride and a helicopter ride. The gum-ball machine says one cent, the sticker machine says five cents, the horse says ten cents, and the helicopter says twenty-five cents. However, when Freddie and Zuri open their change purse and see several coins inside, they are not sure if they have the right coins for each machine. In this video, Freddie and Zuri are learning coins for first grade.

When introducing coins in first grade, it is important to start with a definition. Coins are little, flat, circular pieces of money made from metal. In the United States, coins are usually worth cents, an amount of money that is less than one dollar. We use this symbol, ¢, which looks like a “c” with a line through it to represent cents. If you have one cent, you would write it like this with the number one first and the cent symbol after. Each coin is a different size, has a different face, and is worth a different amount. Some coins are copper-colored while others look silvery.

When teaching first graders how to distinguish coins, it helps to show coins separately first. It is also important to show both the front and back of coins for first graders. Below is a list of values and descriptions for common US coins:

Now that we’ve spent some time teaching coins to first grade, let’s practice identifying some! First, is the gumball machine. It costs one cent. Which coin will we need?

We will need a penny because it is worth one cent.

Next, let’s try the horse ride. It costs ten cents. Which coin will we need now?

We will need a dime because it is worth ten cents.

More videos for the topic Coins

The Dollar (plus Dollar Notation)

Which Coins are Missing?