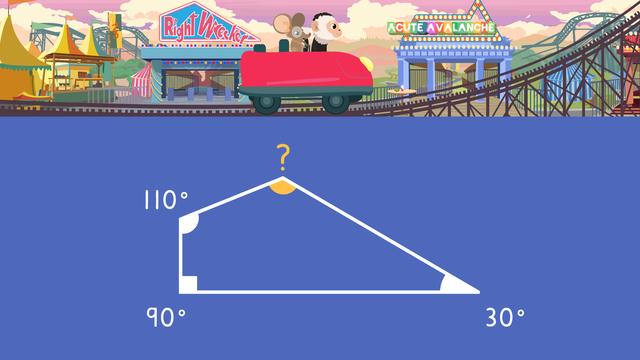 Basics on the topic Angles in Shapes

In this Angles in Shapes Video

What are Angles in Shapes?

Angles in shapes are created by the interior angles of a polygon. Interior angles are angles created on the inside corners of shapes. All geometric shapes have angles based on their number of sides.

Quadrilaterals have four angles and they will ALWAYS total three hundred and sixty degrees.

When measuring angles in shapes, we can find the angles by finding the sum of the interior angles given and subtract that number from the total degrees in the shape or use what you know about a shape's angles to find the missing degrees.

Following the video is additional practice with finding the measurements of all interior angles. There are exercises and angles in 2d shapes worksheets.

“The park is closing soon and we have time for ONE more ride, Nia.” “Let’s go on one of the roller coasters!” "Hmmm(...)WHICH ONE?" “ I want to go on the one with the biggest drop!” We can help Nico and Nia figure out which ride to choose by looking at the inside angles created by the roller coaster rides. "Angles in Shapes" All geometric shapes have angles based on their number of sides. A triangle is made up of three angles(...) and when we add up their measurements, it will ALWAYS equal one hundred eighty degrees. Quadrilaterals have FOUR angles and they will ALWAYS total three hundred and sixty degrees. When we look at the outlines of the roller coaster rides, we can see that they make geometric shapes. We can use what we know about angle measurements in shapes to find the measurement of the missing angle at the top of each ride. Let's look at the Obtuse Oblivion. What do you observe about the shape of this ride? The ride is shaped like an obtuse triangle. One angle measures forty degrees, and the other measures thirty degrees. Let’s think about what we know. We know the measure of two angles and the total triangle will measure one hundred eighty degrees. First, solve this by adding the known angles, then SUBTRACTING the sum from one hundred eighty. Forty-plus thirty equals seventy. One hundred eighty minus seventy equals one hundred ten. The missing angle measures one hundred ten degrees. Next, we’ll check out the Right Wrecker! This one looks intense! What do you notice about the shape and angles created by this ride? This shape is a quadrilateral, which means there are four angles and they measure three hundred sixty degrees in total. We are given the angle measurements for THREE of the angles. We have one hundred ten degrees... and thirty. Even though there isn’t a number here, from the box, we know this one is a right angle. What is the measurement of a right angle? It is ninety degrees. To solve for this missing angle, add the known angles and subtract the sum from three hundred sixty. First, we'll add one hundred ten, and ninety and thirty. What is the sum of these angles? The sum of these angles is two hundred, thirty degrees. Now, subtract the sum from three hundred sixty. What is the measure of the missing angle? One hundred thirty degrees. One more ride to consider(...) the Acute Avalanche! This coaster is made up of TWO shapes. Let’s split them apart and solve for the missing angles in each. What is this first shape? This is a parallelogram, which is a type of quadrilateral. We can solve for the missing angle using what we know about parallelograms. A parallelogram has two sets of opposite angles of equal measure. If THIS angle is one hundred twenty degrees,(...) then THIS angle is also one hundred, twenty degrees. If this angle is sixty degrees... what is the measurement of THIS ONE? The opposite angle would also be sixty degrees. To check our answer, add one hundred twenty, (...) sixty, (...) one hundred twenty, and (...) sixty. These angles total three hundred, sixty degrees. Let's look at the EQUILATERAL triangle. What do you notice about the angles? We aren’t given any of the measurements, but we see they are ALL the SAME size. Since a triangle always has a total of one hundred eighty degrees, we can use that to figure out the measurements of the angles. What number can we add three times to equal one hundred eighty degrees? Sixty! Sixty (...) plus sixty (...) plus sixty equals one hundred eighty. Remember, (...) geometric shapes have angles that have set totals. We can solve for missing inside angle measurements in a couple of ways. One way is to find the sum of angles given and subtract that number from the total degrees in the shape. Or use what you know about a shapes' angles to find the missing degrees. “I think Acute Avalanche looks like it has the BEST drop!” “LET’S GO!!” "Nico, are we there yet?" "Yes, we're at the top!" "HANG ON!!!" "WOOOOOO HOOOOO!"

Would you like to apply the knowledge you’ve learned? You can review and practice it with the tasks for the video Angles in Shapes.
More videos for the topic Measuring Angles

Angles as Fractions of a Circle