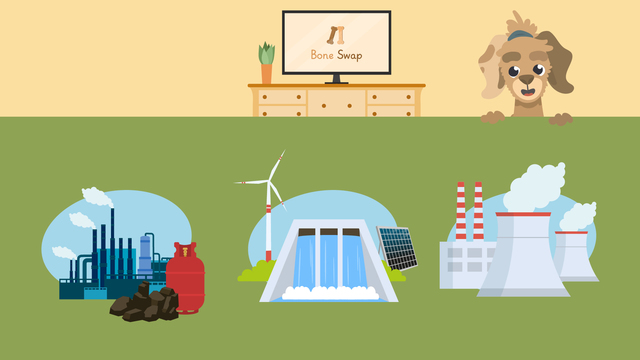 Basics on the topic Electricity in Everyday Life

What uses electricity in everyday life? Join Uma and learn all about electricity and its use in daily life.

After a long day, Uma finally has time for her favorite show, Bone Swap. Yikes! What happened now? Nothing works anymore! This looks like a power failure! Let's learn about electricity in everyday life. Electricity is mainly generated in power plants. There are many different ways to generate electricity. For example, we can burn raw materials such as coal or gas. Or even natural materials like wind, water, and solar power. We can also use nuclear power for generation. The different power plants feed the electricity into the power grid. The power grid distributes electricity to many different consumers, such as trains, factories, and homes. An overhead power line also carries electricity into your home. When it arrives, the electricity flows through an electricity meter. This shows how much electricity is consumed, so how much money has to be paid for the electricity can be determined. Electricity also flows to outlets. Because electricity is dangerous, you should never put body parts or objects into the outlet. Only the power cord from electrical equipment belongs in there. Electrical appliances that have such a power cord are, for example, the refrigerator, the hair dryer, or the computer. Some things we use so often that we don't even think about the fact that they need electricity. For example, the light in your room, or the heating in your house or apartment. There are also cars that run on electricity. These are called electric cars. Just like a tablet or cell phone that you have to keep charging up to use. Without electricity, there would also be no television, internet, or even hot food, because you might have an electric stove at home. We at Sofatutor also needed electricity to make this video for you. So in our everyday life, electricity is very important. We notice this especially during a power outage. Oh, what is Uma doing? Don't do that! Electricity is dangerous and can even be deadly. If something doesn't work, you shouldn't mess with it. Devices that are defective or wet, and no longer function properly, should always be kept away from the power supply and should never be touched. People who can help you with electrical problems are electricians. The higher the voltage, the more dangerous it becomes. You must not get too close to overhead lines, such as the ones you find along railroad tracks. Because if the voltage is high enough, it can become lightning and electrocute you. That's why the lines are placed so high up. Nothing will happen to you as long as you don't climb up to reach them. Therefore, be sure to keep your distance. But enough of the details! Before we see what Uma is up to, let's recap! Power plants generate electricity, which is distributed using the power grid and then reaches your home via an overhead power line. An electricity meter measures how much electricity you use at home. Electricity is very dangerous. In the case of high voltage, you must keep your distance so that it does not electrocute you. There still seems to be no electricity at Uma's. Ah, finally! Unfortunately, the show is already over, and the bones have already been swapped back!

Would you like to apply the knowledge you’ve learned? You can review and practice it with the tasks for the video Electricity in Everyday Life.
More videos for the topic Electricity