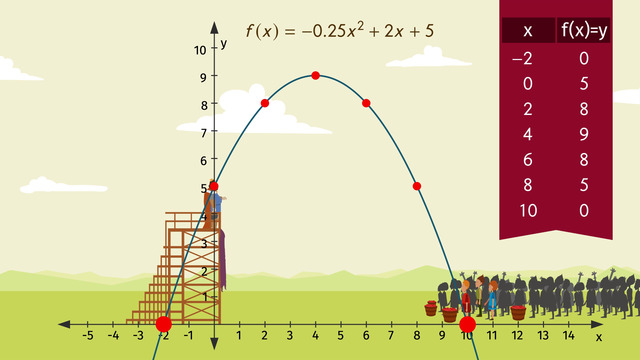 Basics on the topic Word Problems with Quadratic Equations

There are many ways to solve quadratic equations. You can factor them, complete the square, graph them, and use the quadratic formula, for instance.

At least one of these methods can be used to solve any problem involving a quadratic equation, and which method you choose depends on the kind of problem you are presented with.

One must note though that these problems often look for concrete answers, like units of measurement or quantity. A negative root, though a valid solution to a quadratic equation, may not be the answer that a word problem is looking for. A positive root, or possibly roots, then is the more appropriate final answer.

The mighty King Wallace sits on his throne and rules his kingdom every day of the year, except for his birthday. Every year, to celebrate his birthday he takes a trip to visit various scenic outlooks and famous locations within his kingdom. For this year’s birthday celebration, the decision is difficult, there're so many destinations to choose from.But finally, the mighty king decides to visit one of the more beautiful castles in his kingdom for the umteenth time. To prepare for the king's visit, the servants must cover the ground around the castle with carpet, so the King’s shoes won’t get dirty. How much carpet do they need?

Setting up the quadratic equation

To figure this out, we can use a quadratic equation. Take a look at the diagram of the castle. The length of the area that needs carpet is equal to an unknown length, 'x', plus 9, the width is 'x' + 3, and the total area is 72 square wallacesons. You might be wondering, what’s a wallaceson? King Wallace devised his very own system of weights and measures. I know! What a narcissist but whatever, right?! Okay back to the problem. To help the servants figure out the amount of carpet they need, we can set up an equation and solve for 'x'. First use FOIL: first, outer, inner, last. You know the drill.

Next, you'll need to factor the quadratic equation. Using the standard form of the quadratic equation as your guide, set the equation equal to zero. Then find the product of ac that sums to 'b'. That's negative 3 and 15. Now set each of the two binomials factors equal to 0. You're not done yet; you still have to solve for 'x'. Use opposite operations to solve each mini equation. X has two possible solutions, 3 and negative 15.

Let’s plug in the values for 'x' into the equation, so the servants can order the carpet. Plug in 'x' is equal to 3. The measurements are 12 wallacesons by 6 wallacesons! That’s a big carpet! Now for the second value, 'x' = -15. The measurements of the carpet are equal to -6 and -12. You can’t have a negative measure of carpet so although 'x' = -15 works as a solution for the quadratic equation. It’s not a valid solution for this situation. So the correct solution is 'x' is equal to 3.

Indecisive as always, the king changes his mind at the very last minute and decides he wants to visit a place he’s never been to before. He'll go to a village near the border of his kingdom. He’s been curious about this village because he heard they have some unusual customs. When the King gets to the village, the villagers seem normal enough. The villagers stand with baskets of apples patiently waiting for his speech to begin. Luckily for the king, his squire knows all about the village's unusual customs, the villagers always give an enthusiastic welcome to visitors. By throwing apples at them! To keep the king safe, the squire will have to control the crowd, but how can he do that?

The king will give his speech while standing on a tower 5 wallace yards high, at the point on the graph (0, 5). The trajectory of the apples can be described by the function of 'x' = -0.25x² + 2x + 5, since it's a quadratic equation, we know the shape of the graph is a parabola. So, where does the crowd need to stand to so they won't be able to hit the king with apples? This whole situation sounds a little crazy, right? What can you do? You have to respect peoples' customs, right?

Let’s solve this problem by graphing. Plug in a few points for 'x' and determine the corresponding 'y' values. Plot the points and then draw in the parabola. Where the graph touches the x-axis is a possible solution set for this quadratic equation, at 'x' = 10 and -2. The king will be safe as long as the crowd is placed more than 10 feet in front of the podium or 2 feet behind.

We can also calculate the solution by using the quadratic formula. Use the standard quadratic equation as your guide to determine the values for a, b, and c, but first manipulate the equation so the 'a' value is equal to positive 1. You could skip this step, but it makes the numbers easier to work with. Now substitute the 'a', 'b' and 'c' values into the quadratic formula, and then do the math. The answer is the same as before, 'x' is equal to 10 and -2. Just as the squire expected, the crowd welcomed the king by throwing lots of apples but thanks to the quadratic equation, the king gave his speech without a single apple finding its mark.