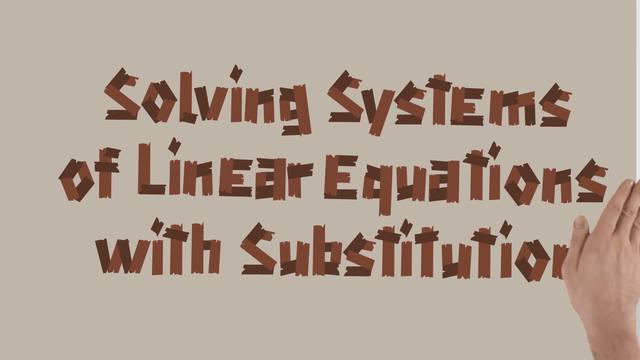 After this lesson, you will be able to use the substitution method to write the solution for a system of linear equations.

The lesson begins with a review of how to use the graph of two lines to find a solution to a system of linear equations. It then outlines a strategy for using algebraic substitution to solve systems of linear equations, without graphing.

Learn how to solve system of linear equations with substitution by helping Valdemar get his ax back!

Before watching this video, you should already be familiar with estimating the solution to a system of equations by finding the point of intersection on a graph.

After watching this video, you will be prepared to learn more about using algebra to solve systems of equations.

Common Core Standard(s) in focus: 8.EE.B.5, 8.EE.C.8 A video intended for math students in the 8th grade Recommended for students who are 13 - 14 years old

Ah, another peaceful morning in Foglandia. Hey, Valdemar! Wake up! Your prized battle axe is missing! It must be that no-good thief, Evil Erik! And he’s already making a getaway! Valdemar gathers his best men and his fastest ship to chase Evil Erik down. But will he catch him in time? Let’s help Valdemar get his battle axe back by Solving Systems of Linear Equations with the Substitution Method. Here we have a line that describes Evil Erik's progress across the ocean at 'y' equals 15x plus 40 . But what's that? Valdemar's ship is quickly catching up with Evil Erik and can be represented by the equation 'y' equals 20x. Know that the point of intersection is the solution to the system of equations and tells us when and where Valdemar finally catches up to Evil Erik! But this point is kind of difficult to make out. And while graphing is a very nice way to visualize the problem and solution, don't you find it sometimes pretty time consuming? We don't always have to graph lines to find the point of intersection. We can just use the algebraic substitution method. Remember substitution is the action of replacing something with another thing. Therefore, in mathematics the substitution method of solving a system of equations is used when one of the equations is solved for one variable in terms of the other variable. Additionally, a solution to a linear system must satisfy all of the equations. That means we have to find an 'x' and a 'y' value that work in BOTH equations. Luckily, the equations we have are perfect for substitution since at least one of them already has an isolated variable. Looking at the second equation, we see that 'y' equals 20x. So, using the first equation we can just substitute the 20x in for the 'y.'

This gives us 20x equals 15x plus 40. Now we only have one unknown and we've solved these types of equations before, right? Remember to first move all terms with variables to one side. To do this we subtract the 15x from the right and left sides of the equation to keep it balanced. This gives us 5x equals 40. Next, we isolate the 'x' variable. How do we do this? By dividing both sides by 5 giving us 'x' equals 8. So far so good, but don't stop here. We still need to find 'y'. Using the second ORIGINAL equation we can substitute the 8 for 'x' to get 'y.' Multiplying 20 by 8 gives us 'y' equals 160. So, the solution to this system of equations is 'x' equals 8 and 'y' equals 160. Nevertheless, something super nice about this algebra is that we can always CHECK OUR ANSWERS. Let's use our original first equation and plug in the values for 'x' and 'y' to double check. Since we're checking we ask does 160 equal 15 times 8, plus 40? 160 does equal 160. Great! Our solution is right! So we can write this solution as the point (8, 160). Which looks like the correct point on the graph too! Awesome!!! Now let's take a look at another system of linear equations. Again, our goal is to find the solution. That is an 'x' and a 'y' value that work for both equations. When using substitution it's nice to have already isolated variables. However, we don't have any isolated variables here. So what do we do? We could pick any variable from either equation to isolate. It's really up to you. A good choice is the variable that's easiest to isolate. Since the 'x' in the first equation has a coefficient of 1, it's the easiest to isolate. We can do this by adding 5y to both sides. This gives us 'x' equals negative 3 plus 5y. We can substitute this expression in for 'x' in the second equation. Notice that we only have y-variables now. So, first simplify both sides. Remember, we can use the distributive property to get rid of the parentheses then combine like terms. Now isolate 'y', by subtracting 24 from both sides and dividing both sides by negative 37. We see that 'y' equals zero. But keep going! We still need to solve for 'x'. To do this, go back to our ORIGINAL first equation and substitute zero for 'y' and solve for 'x.' Giving us 'x' equals negative 3. Now let's use the second equation to check if the solution 'x' equals negative 3 and 'y' equals zero works for both equations. Nice, both sides simplify to the same number. Therefore, we can confidently write our solution as the point (-3, 0). Problem solved and no graphing required! To review solving a system of linear equations using the substitution method, follow these steps: Begin by isolating any variable. Then, using this expression substitute and solve for the first variable. Next, substitute and solve for the second variable. Remember! You can check your work by substituting the point into the unused equation! Finally, write the solution as an ordered pair. Let's see how Valdemar's quest to retrieve his stolen axe is progressing! It looks like Evil Erik's about to get what's coming to him or maybe that battle axe was just for show.

Nature of Solutions of a System of Linear Equations