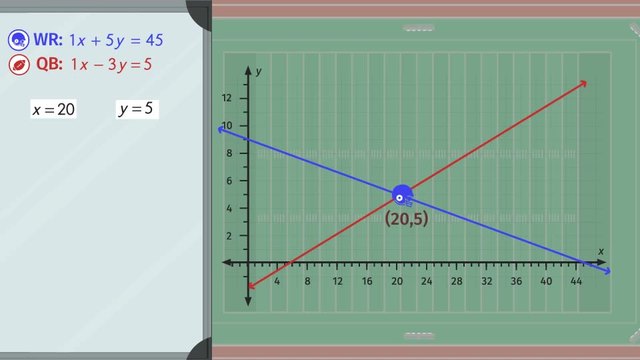 Basics on the topic The Elimination Method

After this lesson, you will be able to solve systems of equations by elimination.

The lesson begins by teaching you that the goal of this method is to eliminate one of the variables first. It leads you to learn how to change or manipulate the equations before you can add them together to eliminate that variable. It concludes by showing you how to then solve for the eliminated variable to get the solution.

Learn about the elimination method by watching the 79ers practice for their football game.

This video includes key concepts, notation, and vocabulary such as whole number constant, which is the number we multiply an equation by to change or manipulate it to get the additive inverse required to eliminate a variable.

Before watching this video, you should already be familiar with the distributive property, additive inverses, the least common multiple, and opposite operations.

After watching this video, you will be prepared to identify real-world situations that may require finding a common point of intersection between two equations and solve them using elimination.

Common Core Standard(s) in focus: 8.EE.C.8 A video intended for math students in the 8th grade Recommended for students who are 13 - 14 years old

Last Friday, the 79ers football team lost really badly, so to avoid being embarrassed again, some of the players decide to stay after practice. The coach has given each of the players a linear equation to determine where they should be on the field. In order to be more successful in the next game and for the rest of the season, the players need to know how to solve linear systems of equations using the elimination method. The coach’s odd playbook calls for his wide receiver to run according to the linear equation ‘x’ plus 5y equals 45. Montana Jo, the star quarterback, needs to throw the ball with the linear equation 'x' minus 3y equals 5. But where will the ball and the receiver meet? Will they meet? Let’s help the receiver figure out where he’ll be able to catch the ball. To make things easier to see, let’s put a cartesian coordinate system over the football field. When using the elimination method on a system of linear equations, the goal is to ELIMINATE one of the variables, but there are some rules you’ll need to follow. If you notice, the coefficient for the variable ‘x’ in each linear equation is positive 1. However, the coefficients for the variable ‘y’ are 5 and negative 3, respectively. Here, we can use the elimination method for solving two linear equations. The goal is to manipulate, or change, an equation so that when we add the two equations together, we eliminate one of the variables. If we multiply the second equation by negative 1, we distribute to get negative ‘x’ plus 3y equals negative 5. "Now, if we add our two linear equations together, we’ll be able to eliminate the ‘x’s, giving us 0x plus 8y equals 40. Now that we’ve gotten rid of the variable ‘x’ in our equations, we can simply solve for ‘y’ using opposite operations."

Remember, always check your answers! You should end up with the same solution, regardless of which equation you use. Dividing both sides by 8 leaves us with ‘y’ equals 5. To find the value for ‘x’, we simply have to plug in 5 for ‘y’ in either equation. Let's use the first equation. So the solution to this system of linear equations is 'y' equals 5, and 'x' equals 20. Remember, always check your answers! Using the second equation and substituting our solutions for 'x' and 'y', we see that we're correct because 5 equals 5. Multiplying a linear equation by negative one is just one method of eliminating a variable. Let's take a look at the coach's second play to get a better idea. The wide receiver should run a '9 route', or the equation, ‘y’ equals 9, and the quarterback needs to throw the ball with the equation x minus 3y equals zero. Another way to eliminate a variable is to multiply one of the linear equations by a whole number constant. A whole number constant is just a number you multiply an equation by that allows you to add the two equations together. First, we have to find the lowest common multiple for the coefficient of either 'x' or 'y'. For this system of equations, we'll choose the variable 'y' because the first equation doesn't have an 'x'. For these equations, the lowest common multiple of ‘y’ and negative 3y is negative 3y. We could multiply the first equation by negative 3, but since we're looking for a number that will eliminate the negative 3y from the second equation, we can use the the additive inverse of -3, which is positive 3, to multiply the first equation by. Doing so gives us 3y equals 27. Just like the last time, we add the two linear equations together and we get ‘x’ equals 27. Aaaaand we already have our ‘y’!: 9! So our intersection point, and the solution to this system of linear equations, is (27, 9). Practice is going great so far, so the coach decides to give some of the other players a chance to prove themselves. The coach tells his backup quarterback, a young kid named Steve, to try out a play. The wide receiver is given the equation ‘x’ plus 2y equals 18, and the quarterback is given the route 2x plus 4y equals 8. We have to look for the lowest common multiple of 'x' or 'y'. If we choose 'x', what is the LCM of 1 and 2? If you said 2, you're exactly correct! Multiplying the first equation by 2 gives us 2x plus 4y equals 36. And since we need the additive inverse of 2x, we need to multiply the first equation by negative one, giving us negative 2x minus 4y equals negative 36. HUH?! BOTH of the variables have been eliminated! What do we do now? Let’s try to turn each of these equations into slope-intercept form to see what’s going on. The first equation in slope-intercept form is ‘y’ equals negative one-half ‘x’ plus 9, and the second is ‘y’ equals negative two over four ‘x’ plus two. If we simplify the slope in the second equation, we see that the two slopes are the same! We have parallel lines! And what do we know about parallel lines? That’s right. The lines will never, ever, ever meet. There is no solution to this system. Let's review our elimination method gameplan using our first example. The first thing we have to do is to decide which variable we want to eliminate. Next, we have to find the lowest common multiple of the coefficients of the variable we choose. Before adding the two equations make sure that we have the additive inverse of our chosen variable. Now that we've eliminated the variable 'x', we can solve for 'y'. Use the solution for 'y' to substitute and then solve for the variable 'x'. Remember, always check your answers! You should end up with the same solution, regardless of which equation you use. It’s gameday! But the star quarterback seems to be a little under the weather. The coach has no choice but to start his young, second quarterback, Steve. Steve has the play, but it’s the parallel play from practice! That play never works! He's gonna have to call an audible! And there he goes! I think the coach has found a new secret weapon!

Nature of Solutions of a System of Linear Equations