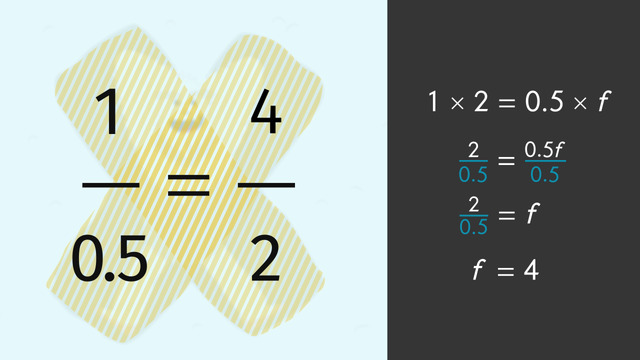 Information about the video Solving Proportions

To understand proportions, you must understand ratios. Ratios are used to compare quantities. You can write a ratio to look like a fraction. For example the ratio one to two can be written as ½.

How do ratios differ from fractions? Fractions are used to compare a part of something to the whole of that same something. Ratios compare quantities, like 3 apples for every 4 oranges. Are you wondering how all of this is connected to proportions? Two equal ratios make a proportion. Proportions are very useful to solve for unknown amounts because you can use cross product, which is also known as cross multiplication.

To use cross product, multiply the numbers that are diagonally across the equal sign. For all proportions, their cross products are always equal. Let’s consider an example. If there are 3 apples for every 4 oranges, and there are 96 oranges, how many apples are there? You can set this up as a proportion. Make sure the numbers for apples are in the same position in the fraction, as well as the numbers for the oranges. This means, be consistent with the quantities you write in the numerator and denominator. If you put apples in the numerators of one ration do so with the other. After you set up the proportion and calculate the equal cross products, use algebra to solve for the unknown quantity. FYI – there are 72 apples.

You may be surprised how useful setting up proportions and using cross product to solve for unknown amounts can be. You can use this strategy to solve all kind of problems as you progress with your studies of algebra and geometry. To learn more about proportions, watch this video.

Andretti the Yeti is worried. Why's he worried? Well, in two hours, he has a date with Nettie the Bodacious Yeti and it's just started to snow.

Snow? What's a little snow when you have a date with the love of your life? Well, Rule #5 of the Yeti Handbook states, if the snow is four feet deep, you can't be outside. Andretti doesn’t know if he'll be able to make it to her place.

The Yeti Weatherman reports the snow will fall at a constant rate of one foot of snow per half hour for the next several hours. Nettie is expecting him in 2 hours. In two hours, will the height of the snow be less than four feet?

Setting up a Proportion or two equal Ratios

Our proportion will contain ratios comparing the amount of snow in feet per hour. Let's look at the given information. We know it's snowing one foot per half hour. How deep will the snow be in two hours?

Andretti the Yeti has an idea of how to solve this problem. He left us a hint in the snow. To solve for the unknown quantity of snow, we'll use cross multiplication, also known as cross product.

To solve, divide both sides by 0.5. f = 4. At this rate, in two hours the snow will be four feet deep. Oh no! That won't work. What should Andretti do?

He should then plan to arrive earlier for his date! He doesn't want to break the Yeti rule, so he needs to get there before the snow is 4 feet deep. In how many hours will the snow be only three and one-half feet deep?

Using the same ratio, let’s set up another proportion, this time to solve for the unknown quantity of hours. We will solve this proportion just like we did before, using cross multiplication.

h = 0.5 · 3.5. To get to Nettie’s place before the snow is too deep, Andretti should plan to meet with her in 1.75 hours, or an hour and three-quarters. He needs to leave fifteen minutes earlier than originally planned.

Nettie is finally ready for their date. Poor Andretti, he followed Yeti Rule number 7 and waited outside of her house since he was too early.

Would you like to practice what you’ve just learned? Practice problems for this video Solving Proportions help you practice and recap your knowledge.
More videos in Proportion and Percents

Convert between Percent, Fractions and Decimals