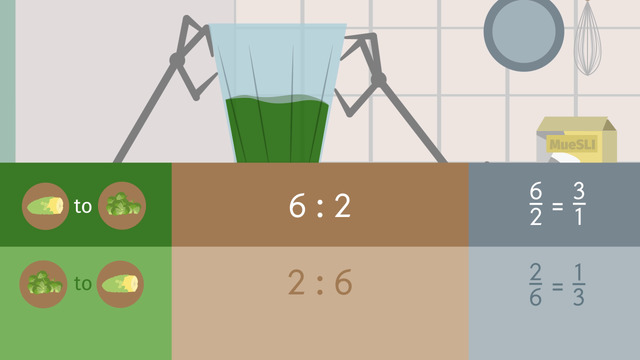 Information about the video Ratio and Proportions

Ratios are used to compare quantities, and two equal ratios make a proportion.

If there are 9 apples for every 12 apples in a fruit basket, the ratio is 9 to 12, or reduced to lowest terms, 3 to 4. You can change the order and still model the same information, 12 to 9 which is reduced to 4 to 3. When using ratios and proportions to solve problems, just make sure to be consistent in the ordering of the quantities.

What kinds of problems real world problems can you use ratios and proportions to solve? Party planning, food supply, manufacturing – the list is pretty much endless. When quantities have a proportional relationship, using equal ratios to create a proportion and then using algebra equations to solve for any unknown quantities is a great strategy to solve problems. For every video you watch you will have a ton of fun. What’s the ratio? 1 video : tons of fun.

Analyze proportional relationships and use them to solve real-world and mathematical problems.

What are Ratios & Proportions?

To start the day, he makes an evil smoothie. Dr. Evil uses his knowledge of ratios and proportions to create the perfect concoction. Ratios are used to compare quantities, and two equal ratios create a proportion.

We can write this ratio in three different formats. We can use the word to, a colon, or a fraction.

It's best to reduce ratios to their lowest terms. So for this situation, the ratio of Monstera Deliciosas to brussels sprouts reduced to lowest terms is three to one.

We can reverse the order of the ratio and still provide the same information. Flip the ratio, and we get brussels sprouts to Monster Deliciosas, a ratio of two to six, which reduces to one to three.

Be careful to match up the quantities with their proper labels. Imagine 6 parts brussels sprouts to only 2 parts Monster Deliciosas, yuck!

After slurping down the smoothie, Dr. Evil works on his latest project, a new, evil hair potion for men. He decides to try it out on himself, as he wants to look especially evil for the speed dating event.

He uses one drop of the potion and voilà, he can style his hair in five different ways but only one out five of the hair styles looks evil.

We can write this as a ratio, one to five. He does a second test, this time using two drops of the potion. The result is now two out of the ten styles look evil. As a ratio, this is two to ten and in reduced terms, one to five.

What's going on here? The two ratios reduce to the same ratio. That’s right, the two ratios are equal, meaning the quantities are proportional. Two equal ratios create a proportion.

At the speed dating event, Dr Evil knows it’s a numbers game. In the past, two to eight women were interested in him.

Two to eight is proportional to one to four. There are four women at the event, so if all goes according to plan, he will match with one very evil lady!

Dr. Evil, really? That's your special lady? Well. As the saying goes, 'Beauty is in the eye of the beholder.’

Would you like to practice what you’ve just learned? Practice problems for this video Ratio and Proportions help you practice and recap your knowledge.
More videos in Proportion and Percents

Convert between Percent, Fractions and Decimals