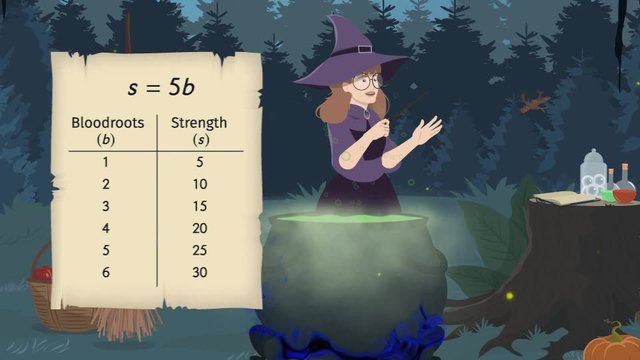 Learn about mathematical terms by helping Wanda the witch, create a golem.

After watching this video, you will be prepared to learn how to solve equations and real world problems involving expressions and equations.

Common Core Standard(s) in focus: 6.EE.C. and : 6.EE.C.9 A video intended for math students in the 6th grade Recommended for students who are 11 - 12 years old

Every week, Wanda the Witch forages in the forest for ingredients for her magic spells. Looks like Wanda needs a longer runway for when she wants to land her magic broom, so she finds a golem spell that'll help her conjure a strong and friendly creature to help her clear some trees for her runway. But, in order to figure out how to create her new golem friend, she’ll have to know about Problems in Mathematical Terms. The magic book states that golems have certain characteristics that are constant and some characteristics that can be changed. A constant is a value that stays the same and does not change. Let's take a look at some of the constant characteristics of golems. Every golem has two eyes, four fingers, and a 3-inch top hat. On the other hand, some of the characteristics of golems are not always the same. For example, there are golems of different sizes and strengths. This means that size and strength are variables. A variable is a value that changes, or varies. The size of a golem is based on how many eyes of newt she uses, and the strength depends on how many bloodroots she uses. The number of eyes of newt and bloodroots are also variables, since they can vary as well. In fact, Wanda can choose them! Since Wanda can freely decide what values to use for the number of eyes of newt and bloodroots, these are called independent variables. An independent variable is one which can be freely chosen and doesn't depend on any other variable. On the other hand, size and strength are dependent variables. Dependent variables are determined by what is chosen for the independent variables. Wanda gathers all of her ingredients, dreaming of her new friend, but first she has to decide how big and strong she wants her golem to be. Variables are usually represented by letters. When deciding on which letters to use, we can freely choose them, but it makes sense to choose one that fits the variable's name. Let's call the number of eyes of newt 'n' and the golem's height 'h'. Her magic book tells her that for every eye of newt she adds, the golem will be three feet taller. We can express what we know in an equation by multiplying 3 by 'n', which gives us 'h'. H equals 3 times n. Earlier, Wanda gathered 6 eyes of newt. But how many should she add to her potion? Let's see if we can make a table with what we know. In our table, the independent variable, 'n', can change without being influenced by anything else in the equation, but the dependent variable, 'h', changes everytime there is a change in 'n'. For example, if 'n' equals 1, then 'h' equals 3 times 1, or 3. If 'n' equals 2, then 'h' equals 3 times 2, or 6, and so on. Wanda thinks 12 feet is a good height for a golem, so she drops 4 eyes of newt into her potion. Her golem needs to be strong if he's gonna help her clear trees. It's a good thing she has plenty of bloodroots! For every bloodroot Wanda adds to the potion, the golem will gain the strength of 5 men. It makes sense to use the letter 'b' to represent bloodroot, and 's' to represent strength. That gives us the equation 's' equals 5 times 'b'. Let's see how many bloodroots she should add. Remember, the number of bloodroots in the potion is the independent variable, and the golem's strength is the dependent variable. If Wanda adds just one bloodroot, the golem will have the strength of 5 men, two bloodroots and the golem's strength increases to that of 10 men, and so on. Since Wanda needs the golem to remove trees for her. She adds 5 bloodroots to the potion, which should give the golem the strength of 25 men! Okay, let's review what we've learned. In mathematical equations, there are two types of terms: constants and variables. There is only one type of constant, but there are two types of variables: independent and dependent. The independent variables in our story were the eyes of newt and bloodroots, since they could be chosen freely. The dependent variables were size and strength, since they were determined by the choice of independent variables. Let's get back to Wanda and see what's cookin'. Looks like things didn't go as planned... But she still likes her new friend.

Would you like to practice what you’ve just learned? Practice problems for this video Problems in Mathematical Terms help you practice and recap your knowledge.
More videos in Applications of Equations

From Equations to Inequalities