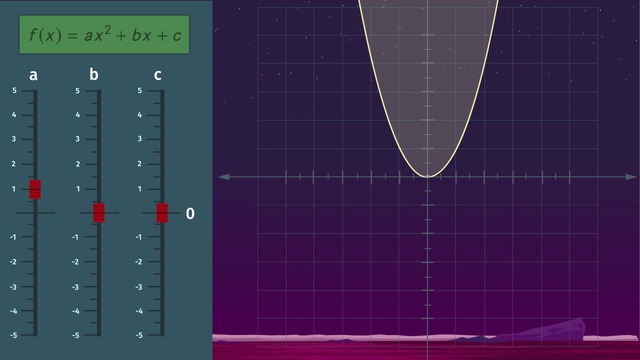 The graph of a quadratic function f(x) = ax2 + bx + c is a parabola, a symmetrical U-shaped curve which opens upwards when a is positive or downwards when a is negative.

Finally, connect these points with the vertex by drawing a smooth curve. The graph produced is a parabola.

Twins, Noah & Joah, have a zoo that travels around the MPI System showing the different animals from around the galaxy. Since they don’t want to harm the animals, the twins have designed a tractor beam that gently plucks the animals and sends them to the animal sanctuary on their mothership, “The ARC”.

The twins love quadratic equations. Being twins, Noah & Joah have a natural love for the number 2 and since quadratic functions have a degree of 2, they designed their spaceship’s tractor beam by graphing quadratic functions. The twins need to diversify their collection of animals. They’ve come to planet Nileesh in search of one small and one large animal to add to their collection. Let’s take a closer look at how the tractor beam works.

The quadratic function graph that the twins use to collect the animals has a negative ‘a’ value. You might remember from math class that when quadratic functions have negative ‘a’ values, the graph, a parabola, opens downwards. The closer the ‘a’ value is to 0, the wider the parabola becomes.
Continuing with the ‘a’ coefficient, when the value of ‘a’ is positive the graph of the parabola opens upwards. The behavior of the graph is the same, the further away the absolute value is from 0 the thinner the parabola becomes. Look what happens when a = 0. Since multiplying anything by 0 equals 0, we're left with f(x) = bx + c, which is just a linear function.

The coefficient ‘c’ simply raises and lowers the parabola’s vertex. The twins spot a small animal Oh wow! It’s a Weebo! The twins need an ‘a’ value to just cover it. Noah knows that the bigger the absolute value of the coefficient 'a', the thinner** the parabola and, since the Weebo is below the spaceship, the 'a' value should be negative as well. Perfect! Oh no! The Weebo is making a run for the bushes. The twins have to change the value of the 'b' coefficient so that the signs of 'a' and 'b' have different signs for the vertex to move to the right. Since the tractor beam needs to be concentrated on the animal, Noah adjusts the 'c' value to -3 to place the tractor beam right above the Weebo.

Great! One down and one to go! Noah and Joah spot a large animal they've never seen before. It's a ginormous manto! Noah sets the tractor beam value for the 'a' coefficient to a wide setting, -0.1. What a relief! It's just enough to cover the large animal. After bringing the animals back to the ship, Joah's in charge of sending them to The ARC safely. Joah reverses the tractor beam by setting the 'a' value to a positive number. The Weebo goes to the mothership with no problems! People will be excited to see these exotic creatures! Joah is set to raise the Manto to The ARC. He sets the 'a' coefficient value to 0.1 and, and maybe the twins have bitten off more than they can chew...

Would you like to practice what you’ve just learned? Practice problems for this video Graphing Quadratic Functions help you practice and recap your knowledge.
More videos in Quadratic Equations / Functions