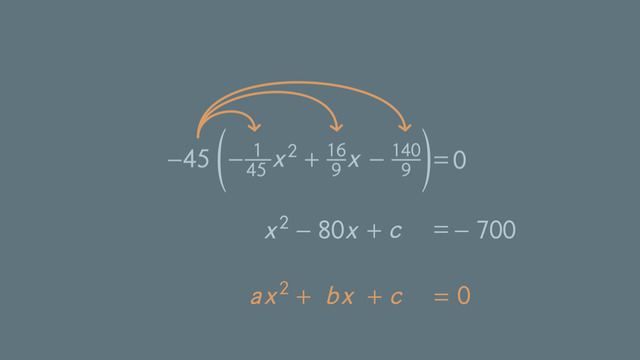 Information about the video Finding the Value that Completes the Square

Quadratic equations can be solved by using a certain method known as “completing the square”.

When solving quadratic equations by completing the square, first rewrite the function in standard form, ax² + bx + c = 0. If the value of a is greater than zero (a>0), then divide the whole equation by a such that the coefficient of x² is equal to one. The quadratic equation is now of the form x² + b/ax + c/a = 0.

Extract the square of the squared binomial by taking the square root of both sides of the equation; the result is a linear equation. Finally, solve the equation by simply isolating the variable x.

Notice that some quadratic equations have two solutions, some have one solution, and some even have two imaginary solutions.

Solve quadratic equations in one variable.

Transcript Finding the Value that Completes the Square

General Good is staking out a warehouse where a high-priority target is located. General Good's mission, should she choose to accept, is to find the values that complete the square.

Let's take a closer look at the General's mission objectives. She must rescue the hostage, Prince Fluffington IV and return him safely to his family. To rescue the prince, General Good must stay in the shadows as she jumps from the roof of one building to another with the aid of her trusty jetpack. The flight path of the jetpack is in the shape of a parabola and can be written as a quadratic function, so before she can rescue the hostage, General Good needs to make some calculations.

The jetpack has two different settings, f(x) and h(x). So to rescue the prince, she has to select the correct one so she can land her jump right inside the airshaft. Let’s draw a coordinate system. We can plot her path on the x- and y-axis. Lucky for us, we know the equation of the two possible flight paths.

Let's take a look at the first one. Since she needs to solve for the roots she sets the quadratic function equal to zero. Okay! Now to complete the square. General Good modifies the equation so the coefficient of the highest power is equal to one. Next, move the constant to the right side of the equal sign and then find the c-value that changes the left side of the equation to have the format of a perfect square trinomial: a² + 2ab+b².

To do this, divide the coefficient of the x-term by 2 and then square it, so -80 divided by 2 and squared is equal to 1600. This is the value that *completes the square. Remember, whatever we add or subtract on one side of the equation, we also must do to the other. Watch and learn!

Factoring and solving for x

Now we can factor the trinomial. Then take the square root of each side and solve for x. As you can see, if General Good chooses this flight path, it'll land her short of the airshaft. So, let’s take a look at the second option. If it doesn't work, I don't know what General Good'll do. Again, we have to complete the square. Set the equation equal to zero. Modify the equation so that the coefficient of the highest power is equal to 1.

Use opposite operations to write the constant on the right side of the equal sign. Find a c-value that creates a perfect square trinomial by dividing the coefficient of the x-value in half and squaring it. Add the c-value to both sides of the equation. Now, factor the trinomial. Take the square root of each side and solve. x is equal to 10 and 90. Thank goodness! The second flight path will work! Whew, I thought jumping between the buildings would be the difficult part of this story.

As expected, General Good lands her jump and rescues the prince, but he’s not exactly what she expected.

Finding the Value that Completes the Square Exercise

Would you like to practice what you’ve just learned? Practice problems for this video Finding the Value that Completes the Square help you practice and recap your knowledge.
More videos in Quadratic Equations / Functions