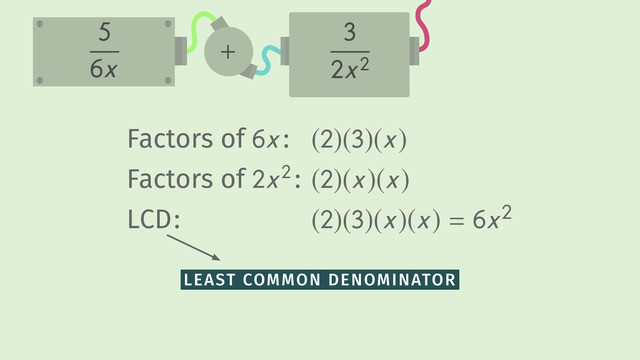 Operations with rational expressions are essentially the same as operations with fractions. One is just dealing with polynomials instead of numbers in the numerator and denominator of the expressions. But the rules for adding, subtracting, multiplying, and dividing, however, are very much the same.

For addition and subtraction of rational expressions, the least common denominator, or LCD, of the expressions must be found. To find the LCD, we factor the denominators to find the unique factors which appear in all denominators and multiply these together to get the LCD. The equivalent numerators are derived by multiplying all the terms of the expressions with the factors (as a fraction equivalent to 1) not found in each corresponding denominator. All the numerators can then be added or subtracted since they are now similar, since their corresponding expressions all have the same denominator now. Simplifying the rational expression in the answer, when applicable, is also recommended.

When multiplying, we can just as easily multiply the numerators of the rational expressions and the denominators as well. Factoring also helps to eliminate common factors in the numerator and denominator so that the answers we initially get will already be the final answer without the need to simplify.

Division, being the inverse of multiplication, is done by flipping the numerator and denominator of the second expression. The expressions are then solved like a regular multiplication operation.

Chris and two of his best friends formed a group to build a drone for their school’s science fair project. There’s just one catch: this year for the science fair, all the students must use rational expressions and four different operations in order to create their project. The students’ entries will be judged by how well adding, subtracting, multiplying and dividing rational expressions is incorporated in their projects. Unfortunately, Chris and his friends were too busy goofing around and having fun. As night falls, and Chris’s friends all go home, Chris realizes that he must complete the project by himself.

His dad, being an engineer, taught him to approach problems one step at a time. Thinking that this is pretty good advice, Chris decides to take a closer look at his project. There are so many wires to connect, what’s Chris to do? He must perform each of the operations to the pairs of rational expressions on the control pad of the drone and connect the wires to the correct answers in order to get the drone working.

Next, he multiplies each fraction by a factor that's not in the denominator. He multiplies 5 over 6x by 'x' over 'x' and multiplies 3 over 2x squared by 3 over 3. Now that the two fractions have the same denominator, Chris can safely add the two numerators and then simplify, if needed.

Since 5, 6 and 9 don't share any common factors, Chris can't simplify the fraction any further. Awesome. One down, three to go. The next set of wires requires Chris to subtract two rational expressions. Luckily, the process for subtraction is the same as for addition.First, Chris must make sure the denominators are the same, so he lists the factors of 4x and 3x plus 1. This doesn't help much, so to find the least common denominator for this expression, Chris multiplies the two denominators together. Chris has to multiply the first fraction by 3x plus 1 over 3x plus 1. The second rational expression has to be multiplied by 4x over 4x. Using the distributive property, Chris multiplies the terms in each of the numerators.

After subtracting the numerators, Chris remembers that he's supposed to write expressions in decreasing exponential order. Two down, two to go. Chris is making excellent progress!

There's one 2 and two 'x's that are in both the numerator and denominator, so Chris cancels out these terms, giving him 5x over 12. That was quick. Uh-oh, the sun's starting to peek over the horizon! It's almost morning! Chris had better get a move on if he wants to finish the wiring on time.

The last wire has two choices. Should he just try them both and see which one works? Chris decides to just work the problem. He can't afford to mess up his project now! Just like when dividing regular fractions, dividing rational expressions is no different. Chris just changes it into a multiplication problem and flips the second rational expression. Since the numerator and denominator don't share any common terms, Chris can just multiply everything in the numerator together and then FOIL the denominator and he's done!

Just as the sun rises, Chris quickly hooks up the last set of wires. Whew! Done just in time! As Chris enters the science fair area, however. It seems building a drone was a popular choice for this year’s science fair. The winner’s even amazed!