Understanding the Relationship between Circles and the number Pi 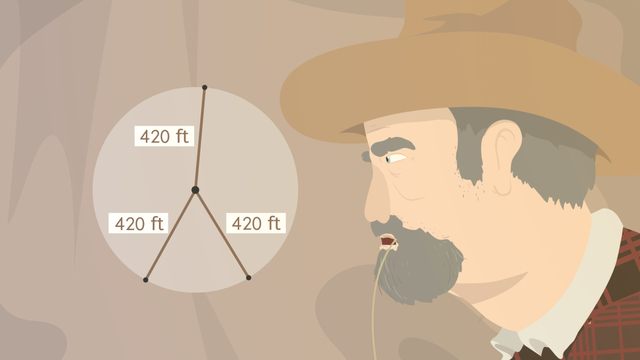 After this lesson, you will be able to identify and define parts of a circle, plus explain the where the number pi comes from.

The lesson begins by teaching you the parts of a circle: radius, diameter, and circumference. It leads you to examine the ratio between a circle’s diameter and circumference, which is pi. It concludes with a definition of pi, which is often approximated by 22/7 or 3.14.

Learn about circles and the number pi by helping Farmer Johnson prove that aliens exist!

This video includes key concepts and vocabulary such as circle (a collection of points equidistant from the center); radius (a line from a circle’s center to edge), diameter (a line passing through a circle’s center, connecting two points on the edge), circumference (the distance around a circle), and pi (the ratio between a circle’s circumference and diameter).

Before watching this video, you should already be familiar with ratios and how to represent values as both fractions and decimals. You should also be comfortable with the concept of a circle.

After watching this video, you will be prepared to learn how to apply the number pi in other formulas, like the area of a circle.

Common Core Standard(s) in focus: 7.G.B.4, 7.G.B.6 A video intended for math students in the 7th grade Recommended for students who are 12-13 years old

Transcript Understanding the Relationship between Circles and the number Pi

As he does every morning, Farmer Johnson is enjoying a hot cup of joe before he gets to his morning chores. But in the distance, he sees something strange. Sakes alive! What's that? Crop circles everywhere! Only one kind of varmint could leave those tracks aliens! Farmer Johnson takes careful measurements of the mysterious markings and high-tails it back to the homestead to get to the bottom of it! While making sense of the crop circles and trying to prove that aliens exist, Farmer Johnson will learn about "Circles and the Number Pi". Farmer Johnson first examines the biggest circle, looking at the distance from the center to different points on the edge of the circle. What do you notice about these measurements? Every time Farmer Johnson draws another line, he gets the same length! 420 feet. Well I'll be a monkey's uncle! Is this proof the markings had to have been made by aliens? Well, actually no, Farmer Johnson. This pattern is true for all circles, no matter who makes them. We call this measurement, from the center of a circle to any point on its edge, the radius. It's usually represented by the letter 'r'. No matter which point on the edge you pick, the radius will always be the same length. In fact, that's what makes a circle a circle! It's a shape formed by all the points that are the same distance away from the center. Farmer Johnson studies his board carefully. There's got to be some way to prove these circles are the work of alien invaders! This time, Farmer Johnson measured both the distance from the center of the circle to the edge as well as the distance across the crop circles, going through the center of the circle. Do you notice any relationship between these lengths? What the blazes! This length across the circle is exactly twice the radius! Here, 840 feet is equal to 2 times 420 feet. And it's true for the other circles too! Farmer Johnson thinks this can't be no piddlin' coincidence! Is it hard and fast proof that aliens were behind the circles? Nope, Farmer Johnson. It's just math. This line is called the diameter. It passes through the center of a circle and touches opposite points on the circle's edge and is always equal to twice the radius. Why do you think that's so? A diameter is made by putting two radii together. Farmer Johnson is still fixin' to prove his wild notion about aliens. He just needs a big breakthrough, something that mere mathematics can't explain! This time, Farmer Johnson measures the distance around the circles, tracing the entire edge. We call this measurement the circumference. Hmm, Farmer Johnson reckons he spies a relationship between the circumference and the diameter. The bigger the circle is across, the bigger it is around. Let's examine the relationship more closely by calculating the ratio of the circumference to the diameter. Two thousand, six hundred and thirty eight divided by 840 is equal to approximately 3.14. Jiminy Cricket! Do you see what Farmer Johnson sees? The ratio, rounded to the nearest hundredth, is always the same! This can only be the work of those blasted aliens! Now, hold your horses, Farmer Johnson. It looks like Miz Johnson has a thing or two to teach her husband. This 'mysterious' ratio you were hollering about is actually a number that mathematicians have known for centuries. We call it PI, and here's the symbol we use to represent it. It's the ratio of any circle's circumference to it's diameter. You heard right, it doesn't matter what size circle you have, the ratio is always the same. Here's the value of pi, 3.141519265 and so on. The number pi is a non-terminating decimal, which means it never ends. It also doesn't repeat. That means it's an irrational number. If we need to calculate with this number, we can estimate it using either the decimal form 3.14 or the fraction 22 over 7. If we need to be exact, we can leave the symbol PI in our answer. Isolating the variable 'c' from, pi equals 'c' over 'd', gives us the formula for the circumference of a circle. Circumference equals pi times diameter. Because the diameter of a circle is twice its radius... we can also write this formula as circumference equals 2 times pi times radius. Farmer Johnson's all tore up that aliens didn't make the crop circles afterall but in the meantime, let's review. All circles share some basic properties, no matter their size. The radius, which is a line drawn from the center of the circle to the outer edge...is always the same length, no matter how you draw it. The diameter is any line that crosses through the center of the circle and ends at two opposite edges. And it's always twice the size of the radius. Finally, we have the circumference of a circle. That's the distance around the circle. The ratio of the circumference to the diameter is the number PI, written with the symbol pi. In calculations, pi is often estimated as 3.14 or 22 over 7 and it definitely wasn't created by aliens! Farmer Johnson heads back to his water tower, down in the mouth that aliens don't exist afterall.

More videos for the topic Circles

Understanding the Relationship between Circles and the number Pi

The Area of a Circle