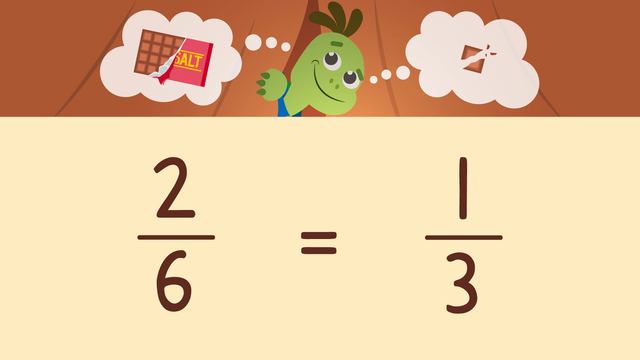 Basics on the topic Simplifying Fractions

How to Simplify Fraction

“Hmmm….I know that sound!” "Mmmmm..." “That’s the sound of my favorite chocolate bar...Succulent Sea Salt!” “BOO!" “Whatcha doin’?” “May I have some, please?” “Sure,if you can solve this riddle.” "Would you rather have twelve-twenty-fourths of the chocolate bar or one-half?" “DEAL!” We can help Tank solve this riddle by “Simplifying Fractions.” Equivalent fractions are fractions that have different numerators and denominators... but are equal to one another because they have the same value. When we simplify fractions, we are making equivalent fractions. We simplify fractions with MANY parts into fractions with FEWER parts to make them easier to understand. Let’s use ten-twelfths as an example. First, we want to think of a common factor that BOTH the numerator and denominator share. What is a common factor of both ten and twelve? Two, since they are both even numbers, two is a factor they share. Next, we divide BOTH the numerator and denominator by two. Ten divided by two equals five. Twelve divided by two equals six. The simplified fraction is five-sixths. Is five-sixths equivalent to ten-twelfths? Yes, they have the same value... and, it’s easier to picture something divided into six parts than something that is divided into twelve parts. Let’s try another example. This fraction is six eighteenths. What is a common factor of both six and eighteen? Since they are both even, we know that they share a common factor of two. Next, we divide both numbers by two. What is six divided by two? Six divided by two equals three. What is eighteen divided by two? Eighteen divided by two is nine. What is the simplified fraction? Three-ninths. Three ninths and six-eighteenths are equivalent. Take another look at the three-ninths. What do you notice about the numerator, three, and the denominator, nine? Three and nine both have a common factor of THREE. We can simplify this fraction AGAIN. How do we simplify this fraction? We need to divide the numerator and denominator by three. What is the simplified fraction? The simplified fraction is one-third. Let’s compare all the fractions… Six-eighteenths, three -ninths, (.three-ninthshird are ALL equivalent. One-third is the easiest One-third is the easiest to understand. "Okay, here's Axel's riddle to solve." He was asked if he would rather have twelve-twenty fourths or one half of the chocolate bar. First, we'll take a look at the fraction twelve-twenty-fourths. What do we do first in order to simplify this fraction? Find a common factor of twelve and twenty-four. Since twelve and twenty-four have several common factors, how do we decide which factor to choose? If we choose the GREATEST common factor, we will only need to simplify our fraction one time. Let’s list all of the factors of twelve. One, two, three, four, six, twelve. Now list all the factors of twenty-four. One, two, three, four, six, eight, twelve, twenty-four. What is the greatest common factor that is in both groups? The greatest common factor is twelve. What is the next step? The next step is to divide both the numerator and denominator by twelve. What is the simplified fraction? The simplified fraction is ONE HALF! Let's compare that to the one-half from Axel's riddle... which is a unit fraction and already in simplest form. The twelve-twenty-fourths or one-half of Axel's chocolate bar are THE SAME! Remember, we simplify fractions with many parts into fewer parts so they are easier to understand. We simplify a fraction by dividing the numerator and denominator by a common factor that they both share. Sometimes they have more than one common factor, so we can divide the fractions more than once OR choose the GREATEST common factor. "May I have some, please?"