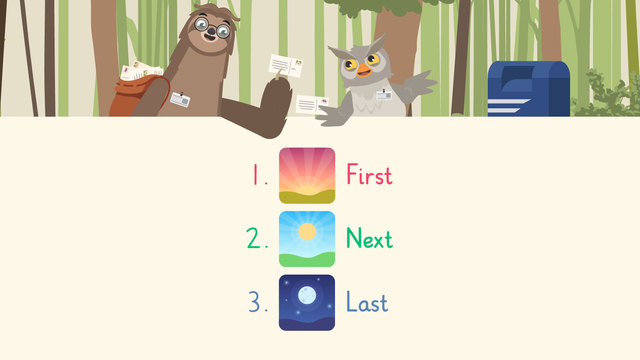 In This Video On Time Order Transition Words

Ernie and Jane are sending out cards to their family and friends. The cards feature a picture of their favorite thing that happened this year. On the back of each card, Ernie and Jane want to write a story about the picture. However, all they have are lists of what happened. In this video, Ernie and Jane learn how to use time order words to turn their lists into three sentence stories.

What are Time Order Words?

Time order signal words tell us when something is happening. They are words like first, next, and last. These words help writers keep their stories in order and show time passing from beginning to end.

How to use Time Order Words?

Start with a list numbered one, two, three where each event is written in order. Then we swap out the numbers for the words first, next, and last.

Number one is first on the list, so we can use the word first in its place.

Number two is second on the list, so we can use the word next in its place.

Three is the last number in our list, so we can use the word last in its place.

Our final step is to rewrite the new sentences next to each other. The list is now a story!

Have you practiced yet? On this website, you can also find time order words worksheets and exercises.

Ernie and Jane are sending cards to their family and friends. Each card has a photo of their favorite thing that happened this year. What wonderful memories! On the back, Ernie and Jane want to write what they were doing in the pictures. They have their lists ready, but need to learn about "Time Order Words" to finish their cards. Time order words tell us when something is happening. We start by putting our story events in order of one, two, three so they make sense. Now, we can use these special words, first, next, last, to turn our list into a story. We call these time order words. They help writers keep their stories in order and show time passing from beginning to end. Let's look at our list. Number one is first on the list, so we can use the word first in it's place. Number two is second on the list, so we can use the word next in it's place. Three is the last number in our list, so we can use the word last in it's place. Our final step is to rewrite our new sentences next to each other. And voila, our list is now a story! Let's teach Jane together! Here is Jane's list: One, I got on the plane. Two, I jumped out. Three, I landed! Our first step is to switch the number one with the word first. First, I got on the plane. Then, we switch the number two with the word next. Next, I jumped out. Finally, we switch the number three with the word last. Last, I landed! Our final step is to re-write our new sentences next to each other. Let's read Jane's card together! First, I got on the plane. Next, I jumped out. Last, I landed! Now that Jane's cards are ready, let's help Ernie. Ernie's list says: One, I got a box. Two, I opened the box. Three, I hung my new hammock! Start by switching number one with first. First, I got a box! Then, switch number two with next. Next, I opened the box. Finally, switch number three with last. Last, I hung my new hammock! Now, rewrite the new sentences next to each other. Let's read Ernie's card together! First, I got a box! Next, I opened the box. Last, I hung my new hammock! "Let's mail our cards!" As Ernie and Jane send the cards, let's remember! Today we learned about the time order words, first, next, and last. They tell us when something happens. We can switch the numbers in a one-two-three list with the words first, next, and last. When we use time order words, we tell the reader the order that something happened. Then, we rewrite the sentences next to one another to finish the story! Look what's waiting when they return home!

More videos for the topic Sequence and Order of Events

Using Transitions to Show the Sequence of Events