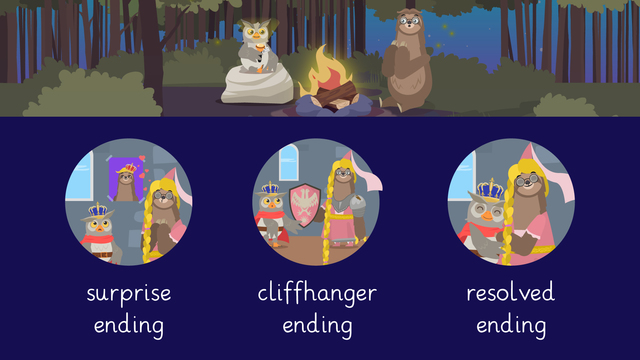 Jane is telling Ernie a story around a campfire, when all of a sudden Jane ends the story abruptly which leaves Ernie hanging! Ernie wants to know what happens next, so let’s learn all about how to end a narrative story to see all the different ways Jane could end this story!

What is a Narrative Ending?

A narrative story is a fictional story that is written to entertain readers and has a beginning, middle, and an end. When writing the ending of a story, it is important to think about how the character has grown or changed as a result of the main event in the story. You may be thinking about how to end a narrative writing, the next section will explain different story ending types you can use for your next story!

There are many different types of story endings. A surprise ending, also known as a twist, is when the story takes an exciting and unexpected turn. Let's look at Ernie and Jane's version of the story Rapunzel with a surprise ending.

Rapunzel was locked in a tower by an evil witch.

One day, Princess Charming decided to climb the hair to the tower.

She reached the top and said, "I'm here to rescue you!" Rapunzel replied, "Rescue? Excuse me? I don't rescuing, I'm actually waiting for Prince Charming to bring me the dinner I ordered, and he should be here any minute."

Rapunzel's reaction to Princess Charming may have been surprising to the reader, so this is a surprise ending.

When writing a good ending to a narrative, you can also use a cliffhanger ending, which is used by the author to excite the reader into reading more by leaving them hanging, or wanting to know more.

Let's look at their version of Rapunzel with a cliffhanger ending. When she reached the top, she saw Rapunzel was dressed for battle. Rapunzel handed her a shield, and said, "I've been waiting for you, let's go defeat the witch!"

This is a cliffhanger ending because this may excite the reader to read, or want to know more, about how they will defeat the witch.

Now that you’ve seen a couple how to end a narrative examples, let’s summarize!

How to End a Narrative Story Summary

Want some to see some more ending stories examples? On this website you can practice writing story endings with worksheets and activities!