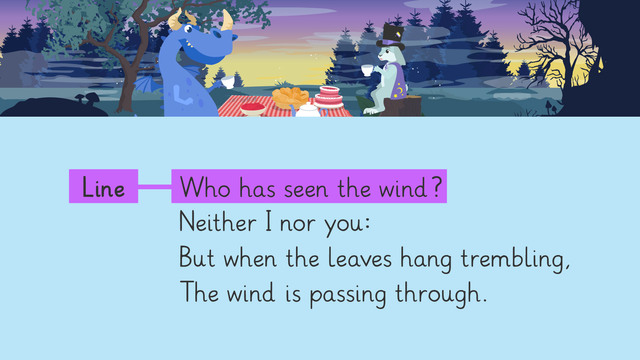 Basics on the topic Elements of Poetry

In This Video on Elements of Poetry

Zayd and Ari are acting out a poem while they have a picnic. They want to help teach all about literary elements of poetry! Watch this elements of poetry video to learn with them, and see what happens when the wind gets even stronger! If you want some practice, you will also find an elements of poetry worksheet below the video.

What are the elements of poetry?

The elements of poetry may not be used in every poem. The poet, or writer, can choose which elements they wish to use!

Here are some basic elements of poetry.

Line - A line is an entire line in a poem.

Stanza - A stanza is like a paragraph for poems. It is a collection of lines.

Rhyme - A rhyme is when you have words that end in the same sounds.

Here are the different elements of poetry you may come across as you read poems.

Below you will find an elements of poetry 4th grade worksheet.

Who has seen the wind? Neither I nor you: But when the leaves hang trembling, the wind is passing through. Who has seen the wind? Neither you nor I: But when the trees bow down their heads, the wind is passing by. You just saw Zayd and Ari in a poem called who has seen the wind, by Christina Rosetti. Let's learn all about the different elements of poetry! Poetry is a style of writing to evoke feelings, thoughts, and emotions in the reader, and often contains some specific elements. Let's identify some elements of poetry. This is called a stanza. A stanza is a collection of lines. There is usually a gap in between stanzas in a poem. A stanza is like a paragraph for poems! This is called a line. A line is an entire line in a poem. Lines in poetry can be different lengths, just like we see in this poem. A line can have one word or a lot of words, and doesn't have to follow usual punctuation rules! Meter is the number of syllables, or parts in a word, that are in one line. For example, who has seen the wind, has five syllables. Neither I nor you has five syllables. But when the leaves hang trembling has eight syllables. What is the meter in line four? The wind is passing through has six syllables. If we continued this for the second stanza, it follows the exact same pattern! When the meter in a poem does this, it usually leads to a pattern called the rhythm. This is the beat or sound that a poem has. Finally, some poems have rhyme. This is when the ending of the last word on specific lines have the same sound. For example, if you look at the second and fourth line, you and through both rhyme. Can you find another pair of rhyming words? In the sixth and eighth line, we have I and by! Not every line of a poem has to rhyme, and some poems don't have any rhyme at all. Another element this poem has is mood. The mood is the feeling the poet is trying to portray in their writing. In this poem, we are talking about a force that is unseen. The poet talks about not being able to see the force, but feeling and seeing the effect of the force around you. We would say the mood is one of wonder or mystery. So, what have we learned today about elements of poetry? Poetry usually have different elements. Some poems have stanzas, which is a group of lines, similar to a paragraph in regular writing. Some poems have lines, which is an entire line in a poem. Some poems have meter, which is the number of syllables in a line, often resulting in a pattern throughout the poem. Some poems have rhythm, which is the beat, or sound, of the poem. Some poems have rhyme, where the ending of the last word on specific lines have the same sound. Most poems have a mood, which is the feeling a poet is trying to portray. There are many elements of poetry. Poems can have many elements, some elements, and in some special poems, no elements at all! Elements can be thought of as a guideline, and not rules, for writing poetry. The important thing is that poetry invokes feelings, thoughts, and emotions. Zayd and Ari may not have seen the wind, but there is no need to wonder how strong the wind is!