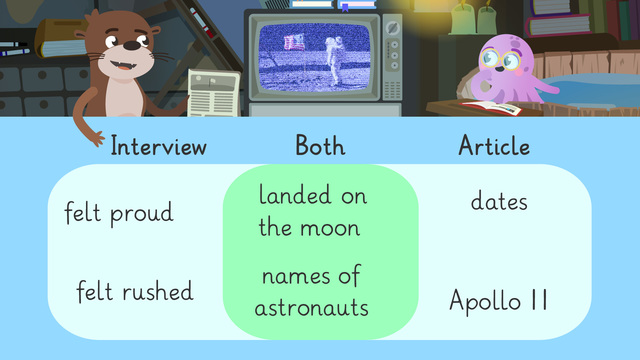 Information about the video Compare First and Secondhand Accounts

What does firsthand and secondhand mean? An account is a description of an event. When we want to learn more about real events we need to read both types of accounts to have a better understanding of what happened.

In this Comparing Firsthand and Secondhand Accounts 4th grade Video

Otis and Pearl are learning about the First Moon Landing. They gather information from a firsthand account and a secondhand account of the event. After reading both accounts, they compare and graph the information they’ve learned…and feel inspired to take that one giant step!

“That's one small step for a man, one giant leap for mankind.” ... “Pearl, WHO are these ast-ro-nauts?” “Let’s do some research and find out!” "Compare First and Secondhand Accounts" An account is a description of an event. We learn about real events by reading FIRSTHAND and SECONDHAND accounts. A firsthand account is a description of an event from someone who experienced it. These accounts include opinions,... thoughts, and feelings about what happened. What are some examples of firsthand accounts? Examples of firsthand accounts are diaries, journals, interviews, speeches, photos, or letters. A secondhand account is a description of an event based on research and written by someone who did NOT experience the event. Secondhand accounts include information from several sources and give key facts and information. What are some examples of secondhand accounts? Textbooks, biographies, and some articles are examples. When researching, we read BOTH types of accounts to have a deeper understanding of the event. Otis and Pearl found two accounts of the Moon Landing. They will read each and then compare the information. Here is part of an INTERVIEW with the astronauts, Buzz Aldrin and Neil Armstrong; let's see what it says. Aldrin: We had some difficulty at first getting the pole of the flag to remain in the surface. At the same time, there was not much of a support force on either side, so we had to lean the flag back slightly in order for it to maintain this position. So many people have done so much to give us this opportunity to place this American flag on the surface. To me it was one of the prouder moments of my life, to be able to stand there and quickly salute the flag. Armstrong: The rest of the activity seemed to be very rushed. There were a lot of things to do, and we had a hard time getting them finished. "These astronauts did something VERY important!" "Here's more about them in this ARTICLE." In 1961, President John F. Kennedy challenged Nasa to have a human on the moon within the next ten years. On July 16, 1969, Neil Armstrong, Buzz Aldrin, and Michael Collins boarded Apollo Eleven, departed from the Kennedy Space Center in Florida, and headed to the moon. Once in orbit, Collins controlled the command module, Columbia. Armstrong and Aldrin boarded the lunar module, Eagle, and descended to the moon’s surface. They chose to land in an area of the moon called the Sea of Tranquility because it was a smooth area that looked safe to land on. On July 20, 1969, Armstrong stepped onto the moon, and said those famous words, ”That's one small step for a man, one giant leap for mankind.” Aldrin joined him and read a plaque that said “ came in peace for all mankind.” Then the two men planted an American flag. They also collected forty-seven pounds of moon rock and dust to bring back to Earth. The Apollo Eleven crew returned to Earth on July 24, 1969. Over the next few years, ten other astronauts would travel to the moon. The last moon mission was in 1972. Now, let's compare the accounts using a comparison chart. We will record what we learned in the firsthand account HERE. What we learned in the secondhand account HERE… and the information they have in common in the middle. What are some things we learned from the interview of the astronauts? They had difficulty planting the flag in the ground. They felt proud of their accomplishment. They felt rushed to get all of their tasks done. What do we learn about the moon landing from the article? The dates of the event. The name of the spaceflight, Apollo Eleven. There were THREE astronauts on the mission. They collected forty-seven pounds of rock and dust. What information was included in BOTH accounts? Men landed on the moon. They planted an American flag. Names of some of the astronauts. There are more facts in these accounts than we recorded. Share more FIRSTHAND and SECONDHAND facts in the comments! Remember... To have a deeper understanding of real events, we read firsthand AND secondhand accounts. A firsthand account is the description of an event by someone who experienced it. A secondhand account is the description of an event by someone who DID NOT experience it. “That's one small step ..."

What is Figurative Language?