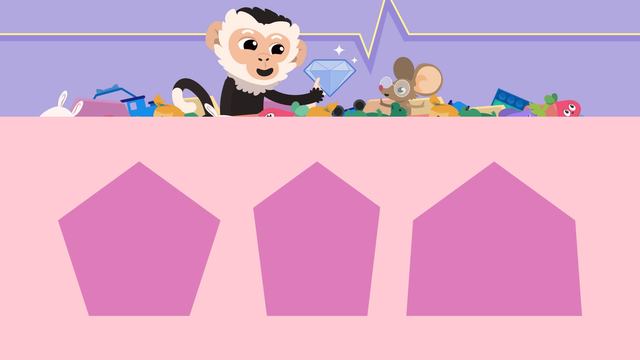 Team Digital
What is a Pentagon?
CCSS.MATH.CONTENT.2.G.A.1

Information about the video What is a Pentagon?

Nico and Nia are at the arcade and just found their favorite game, the claw machine! However, this is a special kind of claw machine, it only releases prizes that are shaped like pentagons. They do their best to see where is the pentagon, before they choose prizes with the claw, but they need to learn more about the pentagon meaning in order to claim their prize!

What is the Shape of the Pentagon?

Pentagons can be defined by three attributes. In order for a shape to be identified as a pentagon, it must have ALL of the defining attributes:

Now that we know what polygon has 5 sides, let’s answer some questions about pentagons.

How Many Sides are on a Pentagon?

In other words, a pentagon has how many sides? In order for a shape to be classified as a pentagon it must have five straight sides. However, it’s not just about the pentagon sides, it must have two more attributes as well!

How Many Angles Does a Pentagon Have?

Now that we know the answer to: “how much sides does a pentagon have?”, let’s take a look at the next attribute. A pentagon must also have five corners, which are also referred to as angles. There is one more attribute a shape must have in order to be classified as a pentagon.

Pentagons must also have one last attribute. It must be a fully closed shape. That means all sides must meet to make corners or angles, without leaving any sides open.

Is this shape a pentagon? Let’s take a look at the attributes.

​​It has five straight sides…

and is fully closed!

This shape is a pentagon!

A pentagon is a five-sided polygon. Pentagons can be defined by three attributes. In order for a shape to be identified as a pentagon, it must have ALL of the defining attributes:

Transcript What is a Pentagon?

More videos in Attributes of Shapes

Sides and Vertices of Shapes