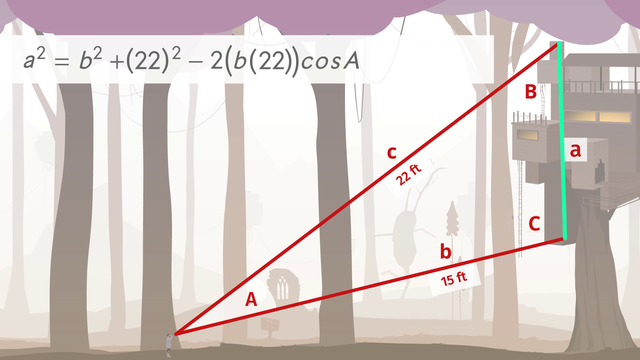 Information about the video Using Trig. Ratios to Find Distances

When learning about the law of sines and cosines, it is important to remember the Pythagorean Theorem: c2 = a2 + b2, and the trigonometric ratios; specifically, sine and cosine.

The law of sines and cosines is another tool for finding unknown angles and side lengths of triangles. This law was derived from the Pythagorean Theorem and trigonometric ratios and is stated as follows:

where the lower case a,b and ,c are the lengths of the sides of the triangle and upper case A, B, and C are the measurement of the angles.

This video provides examples and shows how to use the law of sines and cosines to find angles and side lengths of a triangle.

The law of sines and cosines can also be be used to find the distance of two objects. For example, if you want to find the distance between two ships in the sea from a light house, you can compute their distance once you know the length of the light beams from the lighthouse to the ships, and the angle connecting the beams.

Woody is from planet MO WOOD. He, like all the other inhabitants of MO WOOD, lives in a treehouse. When the males reach the age of 26, they leave their parent’s treehouses to build a life of their own.Woody'll use the Law of Sines and the Law of Cosines to help him build the perfect tree house. Woody now has to do what all the tree people have done before him: he has to build his own tree house. Woody likes the design of his dad’s house, so he decides to take some measurements to help him get started.

Woody notices that he forms a triangle with the top and bottom of the tree house from where he stands. He recalls that he can use the Law of Cosines and the Law of Sines to find lengths as well as angle measures of non-right triangles.

Woody knows the distances to the top and bottom of the tree house are 22 feet and 15 feet respectively. With the antique angle finder his dad gave him, Woody knows the angle is 20.38°. Does Woody have enough information in order to find the height of the living room? Let's take a closer look. The Law of Cosines is a formula you can use to find the length of an unknown side of a triangle if you know the measures of the other two sides as well as the opposite angle of the unknown side.
Let's have a look at the formula. Does the first part of the equation look familiar? It should, it's the Pythagorean Theorem! Notice how you take the cosine of the angle opposite the side you're trying to find. Finally, you multiply the cosine of this angle by 2(ab) and subtract the result from our original Pythagorean Theorem.

Since there are several ways of looking at the same triangle, there are a few variations of this equation you can use to fit your needs. See how similar the form of each equation is? To decide which formula Woody will need to figure out the height of the living room, we compare the sketch of the problem to our formulas. Depending on how you name the sides, you can use the known information to help you calculate which side you want to find. Let's assume our unknown side is 'a' and the known angle is A. Let's plug in the numbers we know so we can find the measure of the last side. First, the length of the longest side, 'c', is 22. The measurement of the second side, 'b', is 15. The angle measure formed by these two sides, ∠A, is 20.38°.

Now all we have to do is finish it off with PEMDAS! First, start with simplifying cosine within the parantheses and the exponents. Next, lets do some PEMDAS. We subtract from left to right. And finally, we get rid of the square by taking the square root of both sides of the equation. So, the height of his dad's house is approximately 9.5 feet.

Now that Woody has the measurements for the height of his new home, he can focus on the exact measurements for his bedroom. This time, Woody knows two angles and one of the side lengths. One of the angles measures 50° and the other he finds is 33.23°. The side length Woody knows is 15 ft., but he's not sure of the angle opposite this side. With this information, Woody can use the Law of Sines to help him determine the other side lengths.

The Law of Sines is a simple ratio that states that the ratio of each side and its opposing angle is the same as the ratios of the other two sides and their respective opposite angles. To find the measure of the last angle, Woody subtracts the known angles from 180°, since all triangles have an internal angle measure of 180°. Now Woody knows that his final angle measure is 96.77°.mGreat! Now he can use the Law of Sines to help him figure out how tall his bedroom should be!

Since it doesn't matter which side is labeled 'a', 'b' or 'c', Woody just has to make sure that the ratios he sets up are the side lengths to opposite angles.Since all the ratios are equal and now that Woody has one complete ratio, he can calculate the lengths of the two unknown sides. Woody can isolate the variable in both of the equations and then calculates the side lengths. Let's focus on 'b' for a moment. To isolate 'b', we multiply both sides by the sine of 50. Calculating from left to right we get: ‘b' equals approximately 11.57 feet. We follow the same steps for finding the lengths for side 'c'. Since this is the leg that Woody wanted to find, he now knows how tall his bedroom should be: approximately 8.28 feet.

Would you like to practice what you’ve just learned? Practice problems for this video Using Trig. Ratios to Find Distances help you practice and recap your knowledge.
More videos in Trigonometry

Using the Law of Sines and Cosines to Find Angles