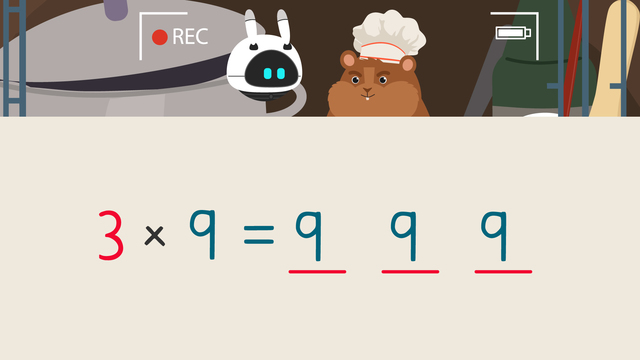 In this multiplication as repeated addition video...

Chef Squeaks is hosting his cooking show. In this episode, he makes pizzas with different toppings. However, when he reads the multiplication expressions on his recipe cards, he doesn’t know how to solve them! In this video, we teach Chef Squeaks repeated addition. Imani learns what repeated addition is in math too!

What is repeated addition?

How do you form repeated addition from multiplication?

Begin by looking at the first factor. This number tells us how many spaces to make.

Next, look at the second factor. This tells us what number to write on the spaces.

Then, write addition signs between each number.

Finally, calculate the sum to determine the product of the original equation.

What is a repeated addition sentence?

What are examples of repeated addition?

Below are repeated addition examples.

A general example of a repeated addition problem

Multiplication with a repeated addition model.

"Welcome to back to 'Stuff Your Cheeks with Mr. Squeaks!' "Over the commercial break, I finished saucing our pizzas." "They are now ready for all sorts of toppings." "Let's check our recipe cards to see how many toppings we'll need for each batch." Uh-oh, Chef Squeaks has not learned multiplication yet! But, he will need to solve the equation to calculate how many toppings each batch will need! Let's help him solve his problems using "Multiplication: Repeated Addition". There is no reason for Chef Squeaks to worry every multiplication problem can be rewritten as a repeated addition problem. Multiplication is just a shorter way to write how many times we add a number to itself. In multiplication, we call the numbers being multiplied together factors. The first factor tells us how many times we should add the second factor together to find the answer, or product. For example, our first recipe card says pepperoni: three times nine. Using repeated addition, we can restate this as three groups of nine added together. The first factor, three, tells us to make three spaces. Then, the second factor, nine, tells us what number belongs in each space. Next, we write addition symbols in between the numbers. Then we can solve! Nine plus nine is eighteen plus nine more is twenty-seven. The product of three times nine is twenty-seven. Chef Squeaks will need twenty-seven pepperonis for this recipe, nine pieces for each of the three pizzas! His second recipe card says mozzarella cheese: five times seven. Remember, using repeated addition, we can say this is five groups of seven added together. Let's begin by making five spaces. Then, put the number seven in each space. Now, write the addition signs in between the numbers. Our multiplication problem is now a repeated addition one! How do we solve it? We add seven together five times! Seven plus seven equals fourteen. Fourteen plus seven equals twenty-one. Twenty-one plus seven equals twenty-eight. And, twenty-eight plus seven equals thirty-five. So, what is the product of five times seven? The product is thirty five! Chef Squeaks will need thirty-five mozzarella cheese slices for this recipe seven slices for each of the five pizzas! The last recipe card says mushrooms: seven times five. This looks a lot like our last card, but something has changed. What is different about this problem from the previous recipe card? This problem says seven times five instead of five times seven. This time we have seven groups of five added together. If we write this problem using repeated addition, how many spaces should we make? We should make seven spaces. What number do we write in each space? We write the number five in each space and put the addition sign in between. How can we solve this repeated addition problem? Finally, we can add five together seven times! Let's go: five plus five equals ten. Ten plus five equals fifteen. Fifteen plus five equals twenty. Twenty plus five equals twenty-five. Twenty-five plus five equals thirty. And, thirty plus five equals thirty-five. What is the product of seven times five? The product is also thirty-five! The only difference is the way we grouped our numbers. So this time Chef Squeaks has seven pizzas with five microchips on each, wait microchips!? Before we figure out why there are microchips on our last pizzas, let's review. Remember, multiplication is just a shorter way of writing the addition of equal groups. Every multiplication problem can be rewritten as repeated addition. Begin by using the first factor to determine how many spaces to make. Next, use the second factor to write the number that belongs in each space. Then, put addition symbols in between. And finally, calculate the total by adding up all the numbers. The SUM is the product of the original multiplication problem! Now, who on earth would put microchips on a pizza?! Imani!!!!

Would you like to apply the knowledge you’ve learned? You can review and practice it with the tasks for the video Repeated Addition: Multiplication.
More videos for the topic Single-Digit Multiplication