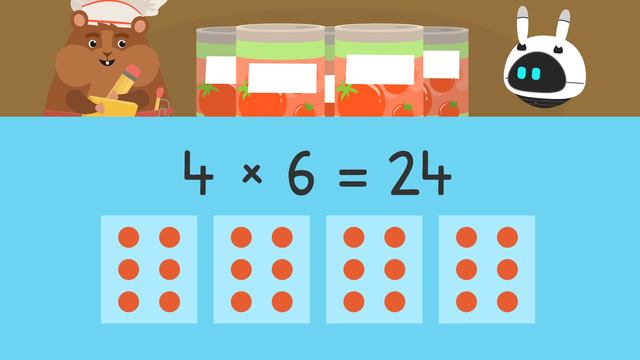 Information about the video Multiplication (of equal groups)

In this Video on Equal Groups Multiplication

What Are Equal Groups in Multiplication?

The first factor, or number, tells us how many groups there are.

The second factors or number, tells us how many mushrooms are in each group.

When we model this, we can easily count all sixteen mushrooms to calculate the product, or answer. Thus equal groups and multiplication go hand in hand.

Then, the second factor, five, tells us how many dots to make in each group. We'll make five dots in each box.

Now we can solve this by counting up all the dots. There are fifteen dots in all, so the product of three times five is fifteen.

Remember, ​​multiplication is a way of finding the total number of items in equal-sized groups. Using this idea of equal groups, we can restate any multiplication expression with the words 'equal groups of'.This helps us figure out what to draw to find the answer:

*The second factor tells us how many dots to draw in each.

More videos in Multiplication and Division