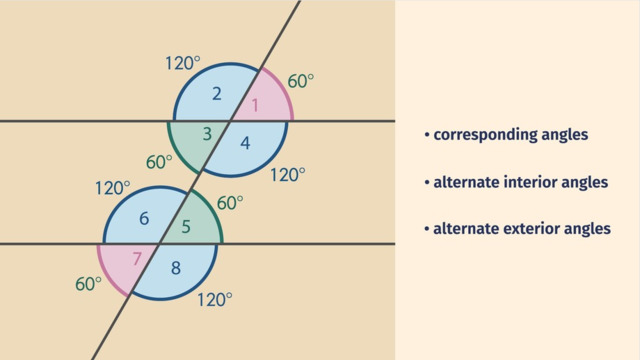 Information about the video Angles of Parallel Lines Cut by Transversals

After this lesson you will understand that pairs of congruent angles are formed when parallel lines are cut by a transversal.

The lesson begins with the definition of parallel lines and transversals. It leads to defining and identifying corresponding, alternate interior and alternate exterior angles. It concludes with using congruent angles pairs to fill in missing measures.

Learn about parallel lines, transversals and their angles by helping the raccoons practice their sharp nighttime maneuvers!

Before watching this video, you should already be familiar with parallel lines, complementary, supplementary, vertical, and adjacent angles.

After watching this video, you will be prepared to find missing angles in scenarios where parallel lines are cut by a transversal.

Common Core Standard(s) in focus: 8.G.A.5 A video intended for math students in the 8th grade Recommended for students who are 13-14 years old