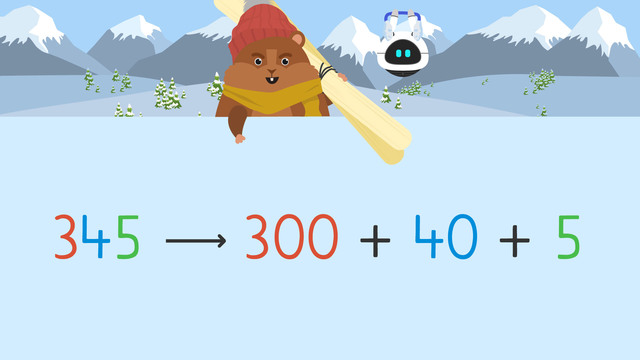 In This Addition with Expanded Form with Regrouping Video...

Mr. Squeaks is going to ski school over the weekend! He is curious to know how far he skied on the slopes each day. We teach Mr. Squeaks how to use expanded form when solving three-digit addition problems (regrouping) to determine the distance he skied.

What is addition with expanded form with regrouping?

Expanded Form is an addition strategy we can use to help solve equations. Expanded form is a way of writing numbers to emphasize the value each digit has. For example, three hundred forty-five can be rewritten in expanded form as three hundred plus forty plus five. We can use this format to help us add with regrouping.

How to do Three-Digit Addition with Regrouping using Expanded Form

Let’s use the example three hundred eighty one plus ninety-nine.

First, rewrite the equation in expanded form, one on top of the other.

Then, start adding the ones column. Here the sum is ten. Since ten has zero ones and one ten, we write zero in the ones place. Then, we regroup, or move, the ten to the top of the tens place.

Now, add up the hundreds column and write the sum, four hundred, below.

Finally, take the answer out of expanded form by adding it together.

Have you practiced yet? On this website, you can also find three-digit expanded form addition with regrouping examples on worksheets and exercises.

Would you like to apply the knowledge you’ve learned? You can review and practice it with the tasks for the video Three Digit Addition with Regrouping - Expanded Form.
More videos for the topic Expanded Form