What is a Variable? 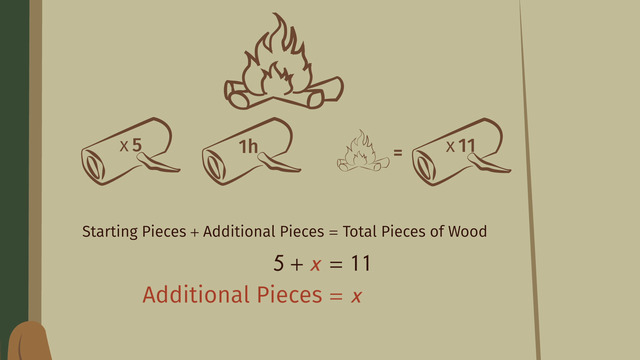 Basics on the topic What is a Variable?

A variable is a symbol that is used to hold a value or values in equations and inequalities. It is usually represented by a letter like x, y, or any letter which best represents the unknown value or values. Variables are used in writing algebraic expressions, together with constants, operators, and coefficients, to solve real-world or mathematical problems. Since variables represent unknown numerical values, we can perform operations on them just like we do with numbers. This means that the operations addition, subtraction, multiplication, and division apply to variables as well. Learn what a variable is by helping the two Junior Explorers, Jessica and Cello, earn the prestigious Blue Diamond Survival Patch on their camping trip in the New Mexico desert. Common Core Reference: CCSS.MATH.CONTENT.6.EE.B.6

Transcript What is a Variable?

Scout master Blanco and two Junior Explorers are camping in the New Mexico desert. The two Junior Explorers, Jessica and Cello, must successfully survive a night in the desert alone in order to earn the most prestigious badge: The Blue Diamond Survival Patch. They’re accompanied by their trusty handbook, which will advise them on how to deal with the desert’s perilous variables. As night falls, the Junior Explorers are left with their handbook, their courage and their wits. Mr. Blanco is planning the bonfire for the next night. He of course, references his survival handbook.

It says that, in order to make an awesome bonfire. The fire needs 5 pieces of wood to start, and each additional piece adds an hour of burning time. It also says that the number of pieces of wood for an ideal campfire is 11. How can we express this mathematically? To help Mr. Blanco build the ideal campfire, we can substitute other information we know into our equation. There's one piece of information missing, which we call a variable. But this would be annoying to write, so we can just use a letter for the variable, i.e. "x", but make sure to remember what it stands for. After deciding how much wood he’ll need for the next night’s bonfire, Mr. Blanco goes off into the night in search of wood.

Now that the Explorers are all by their lonesome, the trepidation sets in. What's this? Is that a coyote? Cello's in luck? To help him in his quest for the Blue Diamond Survival Patch, Cello can use his handbook and the steaks his mom packed for the trip. Cello looks in his handbook and it says that coyotes need one steak to keep them occupied long enough so you can escape. The handbook suggests to set up an equation with the help of variables. The total number of steaks minus the number of coyotes you can distract equals the steaks available for the campers to eat. We know the total number of steaks, 15 the campers and Mr. Blanco only need 5 steaks. The total number of distracted coyotes is our final unknown, which we'll call 'c', for coyotes. Now that we're down to our final variable, Cello can now solve his coyote problem.

Meanwhile, while preparing for bed, Jessica is interrupted by a familiar sound coming from outside her tent...it must be a rattlesnake...or two...or….MORE?! The only thing Jessica is sure about is that there are rattlesnakes outside her tent, and she brought 4 sacks for catching snakes. She quickly consults her Junior Explorer handbook and it tells her that the best way to deal with rattlesnakes is with a snake scoop and a burlap sack. She can put up to three snakes in a sack. How many snakes could Jessica bag with the sacks she’s brought? We take the total number of sacks Jessica brought, 4 and multiply by the number of snakes she can put in each sack, 3. Finally, we can name our variable, the number of snakes Jessica can catch, 'S'.

In the morning, and without incident, the two Junior Explorers meet at the center of the camp. When they notice a trail. How to make coyote noises? How to sound like a rattlesnake? The Junior Explorers follow the trail of items and it leads them to Mr. Blanco?!? That trickster! These Junior Explorers really deserve their Blue Diamond Survival Patches!

What is a Variable? exercise