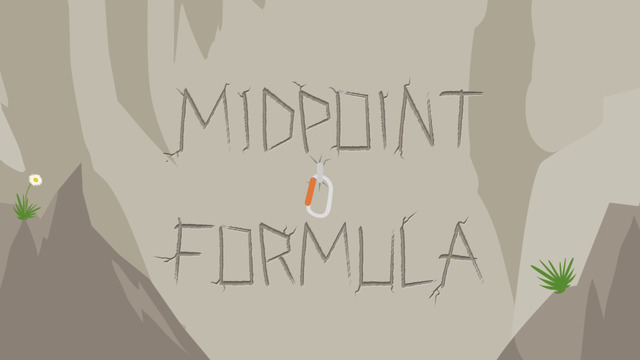 Information about the video The Midpoint Formula

Represent complex numbers and their operations on the complex plane.

Meet Imke, she’s an avid rock climber and a hobby ornithologist. You know - she’s into birds. Imke wants to see a very rare bird that makes its nest in a cave on Mount Massive in Colorado. So she must plan her climb carefully for the arduous journey. The path to the nest is divided into three segments. In order to ensure a safe ascent, Imke will need to use cams to secure her rope to the mountain at different points along the way.

Imke can use the Midpoint Formula to help her. Take a look at this map of the route. Notice the coordinate grid? We're given the ordered pairs for the location of the starting point, and three lookout points. Okay, let’s tackle the first segment. Imke wants to determine three, equidistant locations along the route to place her cams.The starting point is at position (1, 2) and the first lookout point is at (11,8).
Or, being more abstract, the coordinates of the two points are (x1, y1) and (x2, y2).,To find the exact midpoint between these two points, you can use the Midpoint Formula, where you add the two x-values and divide by 2 to get the x-coordinate; as well as adding the two y-values and then again dividing by 2 to get the y-coordinate.

Now let's figure where Imke should place her last cam on this segment: We already know the first midpoint cam's coordinates and the coordinates of the first lookout point. So we'll need to use the ordered pairs, (6, 5) and (11, 8) to determine the final midpoint. Do the math and the third cam should be placed at the ordered pair (8.5, 6.5).

Great. We've calculated the location of three points that are equidistant from each other. We did this by first diving the segment in half and then dividing the resulting segments in half again. Imke knows exactly where to place her cams to ensure a safe climb.

Imke plans to rest for the night at a location smack dab in the middle of the first and second lookout points. The first lookout point is at (11, 8) and the second is located at (-3, 12). Figuring out where Imke needs to set up camp is easy; we just use the midpoint formula with the coordinates of the lookout points to calculate the midpoint. Be careful with the signs! Sweet dreams at (4,10), Imke! After a rejuvenating rest, Imke is ready to tackle the third and last segment.

The bird’s nest is supposed to be right in the middle of the third segment between lookout point (-3,12) and lookout point (-3, 17). Imke can use the midpoint formula again. But this time she sees a similarity in the coordinates. Since the x-values of both the endpoints are the same, she knows the x-value of the midpoint will be the same too, negative 3. Now she just needs to calculate the midpoint of the y-values by finding the average of the sum of 12 and 17, which is 14.5.

Finally, Imke is almost there. Just a little bit further. Oh!! Look at the baby birds!! They are just so adorable! Oh no! It's the momma, and lemme tell you, she's one angry bird!!

Would you like to practice what you’ve just learned? Practice problems for this video The Midpoint Formula help you practice and recap your knowledge.
More videos in Radical Expressions / Equations