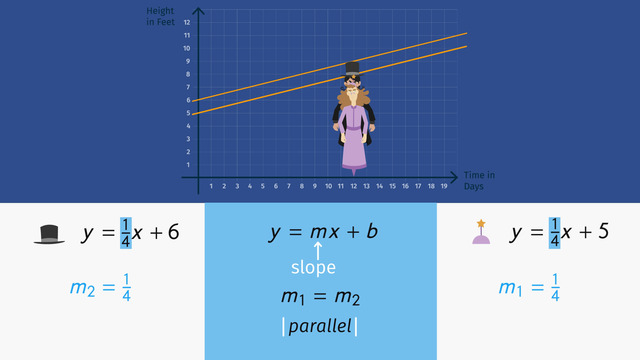 Basics on the topic Parallel and Perpendicular Lines

So, just by looking at the equations, without plotting points on a graph and drawing a line, you can determine if the slopes are parallel or perpendicular? You sure can! To learn more about the slopes of parallel and perpendicular lines and see some awesome examples, tune in to this video.

Write equations of the line.

Although Richard the mage is the world's greatest wizard, he’s unhappy because he’s crazy jealous of his nemesis, The Dark Count.

Not only does The Dark Count have an incredible selection of the very finest English breakfast teas, he’s also a few inches taller than Richard.

To grow taller than his nemesis, Richard uses wizardry to create a special growth potion. But, The Dark Count has impressive magic skills plus knowledge of parallel and perpendicular lines, so anything could happen.

We’ll use our mad math skills to explain... The Dark Count is six feet tall. As he's a full grown man, the line to describe his height would look like this. The equation of this line is y = six.

Now for Richard the mage, he starts out at five feet tall and after drinking the potion, he'll grow quickly. We can describe the line of his growth as y = 1/4x + 5.

Compare the two lines. If all goes according to Richard's plan, you can see that after four days, Richard will be taller than The Dark Count. But The Dark Count, not to be outdone by Richard, drinks a growth potion as well.

The equation of the line describing the Count's height after he drinks the potion is y = 1/4x + 6. Look what happened to the graph. The lines are now parallel. Is it magic? No, just math.

The equation of each line is in slope intercept form, y = mx + b. See? Both equations have a slope equal to one-fourth.

Whenever lines have the same slope, they are parallel.

Now, given this situation, Richard will never, ever be taller than his nemesis! Oh no, The Dark Count just donned his big sunday hat! Look! Now The Dark Count is 12 feet tall on day 12.

What would have been the equation for his height, if he had worn his hat from day 0? Remember, the slope of the equation shouldn't change since the slope is describing the same potion Richard and the Count used from before.

Basically, we are looking for the equation of the line that passes through point P AND is parallel to the line with the equation y = 1/4x + 6.

To solve, we can use the point-slope form. Substitute the values for point P into the formula as y1 and x1 then use the Distributive Property. Simplify the problem and display the answer in slope-intercept form. Notice the slopes of both lines are the same.

Richard the mage doesn't give up. He concocts a shrinking potion hidden inside an olive-eye and intends to slip it into The Dark Count's drink.

If this plan works, The Dark Count's growth will be described by this line. Its equation is y = −4x + 40.

Instead of growing one foot in four days, The Dark Count will shrink four feet in one day! Let's look at the graph. Something magical is happening.

The lines are no longer parallel; they are perpendicular. Do you see the ninety degree angle?

Let’s get back to the two magicians. Oh no! The Dark Count has pulled the ol' switcharoo on Richard.

Would you like to apply the knowledge you’ve learned? You can review and practice it with the tasks for the video Parallel and Perpendicular Lines.
More videos for the topic Linear Equations and Inequalities